There’s nothing cements a films place in cinematic history like getting banned; A Clockwork Orange, The Exorcist, The Texas Chainsaw Massacre, you couldn’t see any of them when I was a kid with a curious attitude, since they were unavailable on VHS for varying reasons. They’re all easy to find now, but the full version of Ken Russell’s The Devils, however, is still impossible to locate on any streaming service in 2022; there’s an urban legend that Apple had it in their iTunes store for one day before Warners yanked it away, but that’s hard to verify. A cut version has been shown on the BBC amid considerable media backslapping and self-congratulation, and yes, there’s truncated versions on DVD and Shudder, but seeing the full, uncut version of The Devils is really the only way to go. 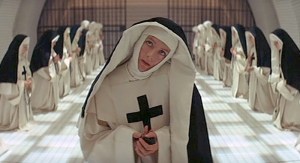 Ken Russell’s notorious film is a serious-minded adaptation of two texts, Aldous Huxley’s The Devils of Loudon and John Whiting’s play The Devils. Oliver Reed and Vanessa Redgrave are on top form as the priest and the abbess set against each other by an inquisition into the behaviour of 17th century nuns. Reed plays Father Urbain Grandier, a complex figure who pretty much bends religion to be whatever he wants it to be to justify his less-than-holy actions. He’s riding for a fall, and when King Louis XIII (Graham Armitage) takes an interest in what’s going down in the town of Loudon, Grandier’s days are numbered. The pivot comes in the form of Sister Jeanne (Vanessa Redgrave), who is obsessed with Grandier, and accuses him of witchcraft and various other HR sack-able offences, leading to a sticky end for all.

Seen with the missing sequence restored (and you’d have to cobble this edit together yourself from pieces scattered online), The Devils is not the hysterical mess that causes critics to blow a gasket at the time, but a sobering and thoughtful depiction of the corrupt nature of power. Yes, the film applies a razor of reason rigorously to the brand of Catholicism depicted, but which has a wider and more potent meaning if audiences can see beyond the sensationalism. This isn’t either for or against any creed, but defends religious belief against the self-seeking, destructive nature of government, seen largely through the king’s garish playboy excesses and the populist puritanism of Pierre Barre (Michael Gothard); there’s a great scene in which King Louis fakes the possession of a powerful witch-hunting relic and the shallow Barre falls for it, hook, line and sinker.

Derek Jarman’s sets are extraordinary, white brick asylums and extravagant demolition machines that look astounding even today. With the gibbering nuns turning up in the fresh lunacy of Space Jam 2, maybe Warners might finally loosen up the reins on this notorious film; The Devils is probably Russell’s best work, and one that is in danger of being forgotten until the original cut can be legally screened; the film DOES require the missing scenes to be fully appreciated. As the trailer says, The Devils is not for everyone, but we should at least have the option of seeing it or not.