‘It’s a very expensive car chase right now…’ comments a passer-by with a tight grip of the meta in Michael Bay’s high-octane action thriller, and he’s certainly accurate in his description. Ambulance is full of lavish, explosive vehicular action, something that Bay has established he’s pretty good at over the last thirty years; his best films to date, The Rock and Bad Boys, feature genuinely innovative stunt work. Now that Bay has been lured back out of his Transformers toy-box, this remake of a 2005 Danish thriller gives him plenty of opportunity to use the freeways of LA as a giant racetrack that forms a garish backdrop to an intense human drama.

“Do people still rob banks?’ asks an out-of-touch therapist, and the answer is a resounding yes, they rob them big time. You can play as one of three characters in this heist-gone-wrong scenario; the most rewarding role is Eiza González as Cam, a Mexican EMT (emergency medical technician) trying to live-down a speed-freak druggie-past. Her day goes south when she’s called to the scene of a bank-robbery in progress; this whole film is one big active crime scene. Cam runs into two adoptive brothers mid-bank-heist; Yahya Abdul-Mateen II is good-guy Will, who has agreed to act as a wheelman only to pay for his wife’s bill for experimental medical treatment (of course!) and master-thief Danny (Jake Gyllenhaal) who robs banks because it gives him an excuse to snap out groan-worthy one-liners, complain about damage to his cashmere sweater and generally behave like he’s trying out for a Dick Dastardly/Wacky Races movie. 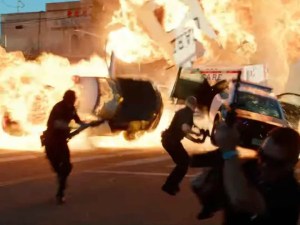 Bay has never been a fashionable name for critics, who are always keen to establish their superiority over material that dares to please the paying crowds who cheerfully finance it. Yet Ambulance may be Bay’s best film to date, dialled back to some kind of recognisable reality with markedly less of the sitcom-comedy, out-dated sexism, urinating robots and rah-rah patriotism that seemed to be the remit of a summer blockbuster maker. Instead, Ambulance burns up the pandemic-emptied streets of LA with screeching tyres and salty dialogue; it’s on message for a film like this to educate us about tech-talk topics like Texas switch, the Feds “vacuuming up paper’ and the classic anti-procrastination mantra ‘wait broke the wagon’. If you don’t know what these terms mean, Ambulance is here to give you a rapid education.

In reductive terms, Ambulance is Speed meets Heat, an all-action cavalcade of carnage that stretches credulity in a good way; hero-worshipping our emergency services is a great look right now, and González makes for the kind of gutsy heroine we can all get behind. Sure, there are a few  cheesy moments, from cute dogs (Bay’s own!) to gnarly surgery at 70mph, but that’s all part of the package. Maybe the party goes on a little too long, yet Ambulance offers a very expensive car-chase that lasts for most of the film, and maintaining that tension brings out the best in Bay as a showman. It’s hard, it’s noisy, it’s loud and it’s fun; if you’re looking for action you can cheer, this Ambulance takes you where you need to go, so buckle up, stab it and steer!

Ambulance hits US theatres on April 8th 2022, and is out now in the UK and elsewhere.