It’s never a great thing to start your movie with a negative, so the opening title ‘Unfortunately, this film is based on true events…’ gets Mark L Lester’s famously hysterical view of educational strife onto the wrongest possible foot from the get-go. Unfortunately, Class of 1984 doesn’t get any better, now dropping on Prime with a sharper picture than the old VHS, but with the scuzzy, knee-jerk reactionary content even worse than remembered. This film was heavily cut for UK release back in 1982, and this fuller, expanded version is an even junkier proposition that before.

Perry King plays music teacher Andrew Norris, who takes on a tough assignment working with inner-city kids in Los Angeles; several scenes are set in front of the metal detectors placed at the entrance of the high school. Science teacher Terry (Roddy McDowell) teaches his class at gunpoint, Michael J Fox sports a pudding-bowl hairdo as a student on the edge of a drug war, and the whole school is dominated by thugs, notably posho Peter Stegman, played by Timothy van Patten. Stegman’s musical abilities are weirdly off the chart, as his piano-playing shows, but his main interests are drugs, sex, violence and generally being a societal malcontent. Norris has no choice but to take on Stegman, and the results don’t go well for anyone… 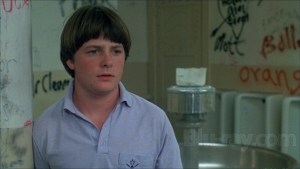 ‘When does the dream become a nightmare…?’ croons Alice Cooper in the opening credits song, and that nightmare is starting now. Lester’s film is all about creating shock, but ends up being exploitation of the worst sort, with unpleasant nudity, kids taking drugs and falling off flagpoles, lots of sexual threat and the audience presumably meant to cheer when bad kids are run through with buzz-saws. Spoiler alert; the finale sees teacher Norris drop his student Stegman from the ceiling via a noose during the school-band’s performance of Tchaikovsky’s 1812 overture, and that’s one of the more subtle scenes here.

Is this the future? No, fortunately, it’s a past that never existed. Class of 1984 aims to be a state of the nation look at the tough conditions in schools; it misses every target it aims for and ends up being the worst kind of sensationalist exploitation. There’s some camp humour for nihilists, perhaps, but this is a grotty, often repulsive film that really doesn’t deserve the luxury streaming treatment; like Stegman himself, a little more care and nurturing was required to make anything of this unfortunate case of arrested development.