Sure, Jean-Claude Van Damme can do the splits on a kitchen cabinet, fight a giant penguin (Sudden Death) or trace a consignment of exploding pants through Hong Kong (Knock Off); but have you ever wondered what his writing would be like? The Muscles from Brussels admits that he’s had significant drug problems during his career, and his script for Sheldon Lettich’s The Order suggests a star way out of control.

A blank canvas in front of him, JCVD kicks things off by imagining himself as a knight at the First Crusades in 1099, sickened by the violence of the age and having an epiphany that involves looking directly at the camera and widening his eyes as a Pino Donaggio score swells in the background. Jump forward to the present day and JCVD is now an Indiana Jones figure in the world of stolen artefacts, complete with a father (Vernon Dubtcheff) who has access to the original knight’s enlightened scrolls. 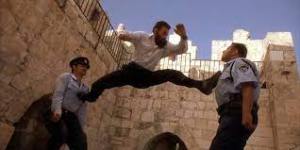 The scrolls are stolen, and Rudy heads for Israel, where The Order considers cultural differences by disguising Van Damme in beard and ringlets as a Hassidic Jew and having him shout ‘Oi Vey!’ as the cops chase him around New Jerusalem. If this doesn’t sound bad enough, Charlton Heston turns up looking rather less than fresh and mumbling about knickers before taking an early bath to allow the kickboxing finale to get into gear. 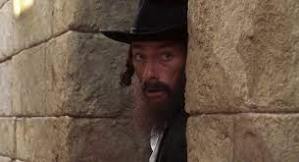 The Order asks far too much of the star, with abrupt chances of tone between murder, comedy, travelogue and philosophising that require the kind of charm that no leading man in cinematic history could make run smoothly. As a ludicrous romp, however, The Order has a few choice moments; as Rudy notes with gravitas, ‘Laughter opens the soul’ and there’s lots of accidental merriment to keep your inner-being well ajar here.