If you’ve lived in New York for any length of time, you’ll have played the street-game ’What is that unidentified liquid that just dropped onto my face? ‘ Rain? Blood? Condensation? Who knows? So 3, 2, 1…cue the winged serpent! Right on cue, Larry Cohen’s rather unique hardboiled NYC cops vs murderous Aztec sects vs scary big bird thriller drops on Prime in a sharp new print, ready to astonish the world all over again. This was a mad, mad movie when I first set eyes on it back in the mid 80’s, and nothing has changed; if anything, it’s even more remarkable because nothing like it ever came down the pike before or after. Sure, Bong Joo-Ho’s 2006 flick The Host has a flavour of this, but the director has said that he lifted the idea directly from Cohen’s movie; this is a real one-off.

Where do you start with a film like this? Although billed as a winged serpent, the monster here is a great big bird that may or may not be an Aztec god incarnate; it sets up a nest in the Chrysler tower in a cental locale of NYC’s Manhattan island, and promptly lays an egg the size of a VW. Even in anything-goes New York, such antics draw attention, and the anxious authorities look to tough-nut cops Shepard (David Carradine immaculate in a three-piece suit) and Powell (Shaft’s super-cool-even-in-this Richard Rowntree) to solve the mystery of exactly what is snatching sunbathers from the city’s rooftops and dropping their body parts directly onto unsuspecting passers-by in the street. So that’s our main story, right? Wrong, the main character is piano-playing jewel-thief Jimmy Quinn (Michael Moriarty) who decides to hide in the building’s roof when a heist goes wrong; discovering the giant egg, he decides to hit up the city with an improbable ransom demand; for a cool million dollars, and a bit of attention, he’ll lead the rozzers to the bird’s nest and save the Big Apple.

Sound mad? Ace in the Hole meets Godzilla meets Network? Q-the Winged Serpent is all of these things, and yet it’s also much more, largely because Cohen can’t write a bad line of dialogue. Detective Shepard arrives on a crime-scene where a window-washer has been decapitated by the beast; ‘Maybe his head just got loose and fell off?’ Shepard wonders, making him the hands-down winner of the ‘detective of the week’ competition. But philosopher Shepard sees a bigger picture when it comes to the bird/serpent ‘If I can kill it, it’s not a god, it’s just a monster’ he wisely concludes. So, just a monster it is. Cohen knocked this movie up in six days when another project got postponed, and the semi-improvised feel is often inspired. 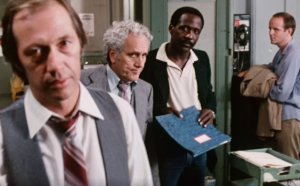 The cherry on the cake is the performance of the always underrated Michael Moriarty as the twitchy felon ‘Get me Rupert Murdoch!’ he shrieks while energetically espousing his own crook philosophy to the dumbfounded cops. This is a fast, funny, frenetic B movie, sure the special effects are shonky and the casual racism isn’t a great look, but that’s in tune with the 70’s vibe; Cohen never saw an action scene which he didn’t feel would be improved by adding an undercover mime artist in an Amadeus T-shirt, and even dressed construction workers as cops for the all-guns-blazing finale.  Q-The Winged Serpent is just the tonic to make even the most jaded film-goer admit that there’s absolutely nothing else quite like this out there…