Yikes! Amazon Prime are currently offering up this laughable Tom Hardy fantasy movie which their blurb describes as having been made in 2019, except this film clearly wasn’t made in 2019; it’s actually from 2006. Then again, you don’t go to Amazon’s computer-generated blurbs for basic accuracy; they’ve also listed Joan Crawford’s Oscar win for Mildred Pierce as being from the same year, some forty years after her death. Films like the Minotaur don’t deserve too much respect, unless you’re a fan of truly bad movies. The calculation by film-makers is that most of us have heard the Greek legend of Theseus and the Minotaur, so the movie might just connect with a captive audience of closet classical studies fans worldwide. That this Luxembourg-filmed Euro-pudding did no such thing is largely due to the stalwart efforts of the cast and crew assembled here, who somehow turn a venerable story into a risible visual porridge of bad acting and worse dialogue.

So this is the great Tom Hardy in his ‘nobody cares’ phase, long before he notably re-invented himself so strikingly with Bronson. Lank of hairdo, he shuffles around a tatty labyrinth set in sackcloth and ashes, looking as much of a hero as Baldrick in Blackadder. His character is called Theo, and he’s the son of village chieftain Cyman (somehow Rutger Hauer), who is in conflict with King Deucalion (somehow Candyman Tony Todd). Deucalion has made an arrangement whereby a bunch of Cyman’s citizens are rounded up every three years and thrown into the labyrinth where a beast that was created by the unholy union of man and bull-god will have them for breakfast. Theo is angry that his girlfriend has been previously selected, and infiltrates the Deucalion’s realm to find his girlfriend and kill the unholy beast… 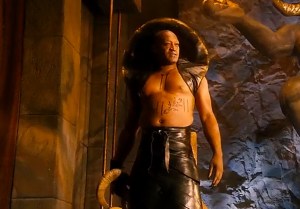 If Hardy’s non-event of a performance is what draws the unwitting into Jonathan English’s film, then it’s Tony Todd’s outrageous performance as King Deucalion that will haunt your dreams and melt your mind. Wide-eyed and senseless, dressed in sweat-soaked bin-bags, Todd is an actor who rarely gives a dull performance, but perhaps took one look the gloomy sets and tatty monster supplied here and thought; I’m going to illuminate this film with sheer acting. The take-away is that Todd is camper than the Rocky Horror Picture Show in this, and the dialogue he spouts defies belief.

In any other film, Michelle Van Der Water’s prodigiously ridiculous work as the felicitous Queen Raphella, who sports spectacular hair and eye make-up arrangements even after days supposedly wandering around in a filthy labyrinth, might have been a taking point, but there’s no competing with Todd’s sensational efforts here. if Joan Crawford hadn’t so famously run away with the 2006 Oscars, surely Todd would have had a chance with this immortal performance..

Deucalion: My God is ready for his meat! Let us see the mouth of hell. Open the gates! [goes towards the two virgins] Do not be afraid, your spirits will lie warm in the belly of the bull, and your flesh will taste sweeter, now that it’s aroused. [yelling down the hole] Come, POWERFUL ONE! Come SEE what I have brought you! COME TASTE!… If this is your pleasure, then so be it; I will corrupt you with every soldier and slave in the palace; I will cast you to the lepers and watch them crawl inside of you. Then when you WILL beg for me – then will come the bull! [Minotaur: pregnant pause] But first, your young shepherd; heh, heh, heh!