The 2022 best actress race has enough strong entries to make for a vintage year; Lady Gaga for House of Gucci, Nicole Kidman for Being the Ricardo’s, Kristen Stewart for Spencer, Jennifer Hudson for Respect. Right in with the rest of the pack is Jessica Chastain’s sterling work as controversial televangelist Tammy Faye Bakker. While the issues involved in Bakker’s story are complex enough to make a biopic a tricky affair, and liberties are taken, it’s hard to argue with Chastain’s performance, which features the grotesque physical transformation that awards voters seem to remember when it comes to ticking boxes online.

Abe Sylvia’s script takes inspiration from a 2000 documentary film, The Eyes of Tammy Faye by Fenton Bailey and Randy Barbato, but Michael Showalter’s drama manages to whip up a head of drama on its own. Tammy Faye (Chastian) has big dreams, and when she meets Jim Bakker (man of the moment Andrew Garfield), the two find a common cause in creating a broadcasting network that artfully separates their congregation from their hard-earned money and boosts their personal wealth. But Jim Bakker has secrets of his own, rules are being broken, transgressions made, and as things fall apart, Tammy Faye has issues keeping home, faith and work afloat… 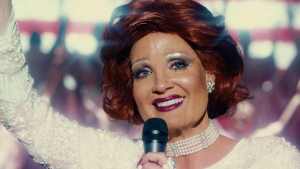 The key issue here, oddly enough for those not familiar with the story, is homosexuality, and Tammy Faye’s unwillingness to toe the line taken by the powerful men around her with regards to those suffering from AIDS in the 80’s. It’s a redeeming character trait, and one that’s much needed; otherwise Tammy Faye is a somewhat absurd figure, quick to organise a song and dance musical routine, but somewhat innocent of her husband’s crooked business and personal affairs until it’s far too late to save herself. She’s an unconventional protagonist, but her story should move audiences thanks to this one specific grace-note.

The fall of the house of Bakker makes for an absorbing watch, with Garfield turning in another strong performance in a hot streak that includes Tick Tick Boom and the latest Spiderman movie. But Chastain is the awards-friendly tour-de force, delving deep into a monstrous figure and coming up with something resembling humanity; it’s not an easy trick, but Chastain absolutely pulls it off and makes this a surprisingly interesting film about a less-than-laudable person. The Eyes of Tammy Faye didn’t make many waves at the US box office on initial release, but today’s furore about Spotify’s direct contribution to the obscene virus death figures in the US makes the issues here absurdly prescient; being good at making money isn’t the only thing that should count, and life has a way of bringing stark justice to those who choose to lose their moral compass for a quick buck.

Thanks to Searchlight Pictures UK for access to this film, out Feb 4th in UK cinemas.