If I’d been faster on the draw, David Chase’s return to the world of The Sopranos would have featured in my top ten list of 2021’s best films; the ongoing pandemic panic is my only excuse for such a notable omission. The Sopranos was a ground-breaking television show back in the day, fondly remembered for its adult, abrasive yet literary tone, and The Many Saints of Newark largely manages the same trick. Yes, this is the origin story of Tony Soprano, now convincingly played by James Gandolfini’s son Michael with a Joe Cocker hairdo, but it’s also a sprawling snapshot of the vicious Soprano family, and they pretty much all sing from the same corrupt hymn-sheet, although casual viewers should be encouraged to take notes; the gangster life is complicated.

‘Pain comes from wanting things’ notes Sally Moltisanti (Ray Liotta); the Soprano family are very much the dark side of the materialist American dream. Sally’s twin brother Dick (also Liotta) returns to New Jersey with fresh bride Giuseppina (Michela De Rossi), causing hot tempers amongst his clan, notably Dickie (Alessandro Nivola) who kills Sally for pushing his bride down a flight of stairs. Dickie is changing lanes on a highway to hell, and his impending moral decline provides some context for Tony’s teenage education. When Tony isn’t knocking over the local ice-cream van and redistributing the contents to the locals, he’s launching a nascent career as a racketeer, but navigating RICO is a tough gig for a teenager. Tony’s family, including his mother Livia (Vera Farmiga) have a battle to keep the kid on the straight-and-narrow; the scene in which Livia attempts to outdo Tony’s teacher in terms of doing her own son down reveals everything about the corrosive bonds that help the family stick together.

Alan Taylor’s The Many Saints of Newark is far smarter than your average gangster movie; a brief shot of a mother carelessly flicking cigarette ash across her own pram gives a flavour of what’s to come. There’s period context, with a black crime organisation led by Harold McBrayer (Leslie Odom Jr) providing the main opposition to the Sopranos; the violence is spiky, brief and shocking, notably a torture scene with an impact wrench repurposed for amateur dentistry. ‘I didn’t know they had Jews in the middle-ages,’ comments one character blithely, but the historical context is vital here, and a reference to changed minds about Mussolini suggests just how much the strongman Soprano family remain hostages to the past.

The Many Saints of Newark isn’t pastiche or parody; it’s a serious story with the depth and detail of a novel and studied performances to match; Liotta is a past master of this genre and works effectively in two roles, and it’s always a pleasure to see Nivola, great in everything from American Hustle to A Most Violent Year, getting his teeth into a meaty leading role. Perhaps TMSON wasn’t exactly the prequel fans of the original show expected, and it asks a lot of the audience in terms of keeping track of a large cast of characters, but with smart dialogue and an epic story of family betrayal to unfold, this is a superbly-upholstered, grips like a vice story of the thug life that chooses you, and well worth a spin on this well-timed blu-ray release. 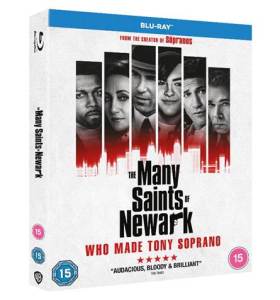 THE MANY SAINTS OF NEWARK is out now on digital and 4K, Blu-ray and DVD.

Thanks to Warner Brothers UK for blu-ray access to this title.