Having seen Star Wars long, long ago in 1978, what were the next steps for the enthusiastic, weak-at-the-knees audience keen for the saga to continue? With The Empire Strikes Back not due out until 1980, the follow-ups on offers were the now-suppressed sequel novel Splinter of a Mind’s Eye, and the Marvel Star Wars comic series. The goal was to engage the audience of the original film, but not move the story forwards in a way that might get in the way of the Empire building ahead. So we got a publication focused on water-treading adventures of Luke and Han separately, and reading the dismal, meandering Star Wars comic pretty much put me off the whole thing.

Disney has a similar problem with today’s Star Wars; they want to keep their powder dry for potential movies, yet keep a massive, demanding audience entertained. The Mandalorian proved popular, so why not bring back another bucket-head in Boba Fett, a bounty hunter from the original trilogy, but now doing almost anything but what he did in his previous profession. We see Fett (Temuera Morrison) escape from the Sarlacc beast from the pit he so comically fell into at the start of Return of the Jedi, and emerge to win over the hearts and minds of the local Tatooine sand-people with his code of honour, Dances with Wolves style. Meanwhile, we also flash forward to Fett as a big cheese in his own criminal enterprise, taking on Jabba the Hutt’s rank cousins in a battle for supremacy. These storylines alternate over the first two episodes, with an attack on a well-protected arms train providing a big-ass action set-piece in the second episode that means that episodes 1 and 2 can pretty much be watched as one pretty slick, open-ended movie.

Books aren’t really party of the narrative, but creating a mythology is; Fett’s escape from the Sarlacc pit isn’t particularly dramatic, but sets Fett up for some Lawrence of Arabia style heroics, and it’s clear that the central character has got gravity and depth to burn. It’s a relief for older fans to get back to Jawas, sand—people and the wretched hive of villainy that is Mos Eisley, and enjoy the kind of gritty cantina intrigue that’s been missing from many of the films. It’s also a plus to savour some well-chosen cameos; Jennifer Beals as a tricky horned hostess, Matt Berry as a skull-faced robot. and no doubt more to come. 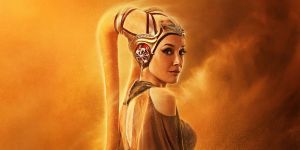 Television, or streaming as we might term it, feels like the right way for Disney to expand the Star Wars Universe outside of our expectations of stand-alone films. With Robert Rodriguez directing episode 1 from a Jon Favreau script, and Steph Green on ep2, The Book of Boba Fett’s opening certainly feels canon, and dodges many of the boring elements of the prequels, from po-faced diplomacy to force-ghost waffle. Perhaps Fett’s saga won’t have quite the impact of The Mandalorian, but on the evidence of the first two stories, it’s a worthy side-chapter in a beloved space-opera story that currently, and not for the first time, seems to have no idea where it wants to go next.

The Book of Boba Fett is currently streaming on Disney+