Paul Thomas Anderson makes a welcome return to pop culture with this wonderfully freewheeling look at early 70’s life in the LA Valley. If you’ve ever wondered if the writer/director would ever make another film that was as much fun as Boogie Nights, then look no further; Licorice Pizza, which takes its name from a popular record store of the time, is exactly the film we’ve been craving. Fast, funny, romantic, and profound, it’s an absolute joy to behold and just the thing to get 2022 off to a flyer.

I first saw the band Haim at a music festival back in 2014; it was clear that the sisters had more to offer than just Fleetwood Mac covers, and so it’s no surprise to see Alana Haim racking up awards nominations for her lead performance here as photographer’s assistant named Alana Kane. While helping students with their appearance before a photo-shoot, Alana stumbles across the confident 15 year old Gary Valentine (Cooper Hoffman, son of the late Phillip Seymour Hoffman) and the two of them become kinda friends, kinda lovers, as he sets up a business selling water-beds that leads them into all kinds of adventures. 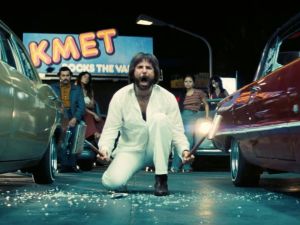 An agreeable nostalgia trip in the style of American Graffiti or Fast Times at Ridgemont High, Licorice Pizza is light, frothy and engaging until the halfway mark, at which point it starts seriously racking up the points in terms of classic cinema. Gary organises a pinball hall and starts seeking another girl, prompting Alana to seek to pique his jealousy, not by going out with the first guy she meets, although she does try that, but with William ‘Jack’ Holden, played here by Sean Penn. The scenes in a golf club where Rex Blau (Tom Waits) organises a flaming bunker to enable Holden to jump his motorbike over in tribute to one of his earlier films is an absolute blast, but Anderson tops it with the next episode. Alana and Gary fall foul of Barbara Streisand’s manic, drug-addled partner Jon Peters (Bradley Cooper is an electric turn that recalls Alfred Molina’s Sister Christian meltdown in Boogie Nights) during a waterbed delivery, and their distain leads to a absurdly comical set-piece involving a smashed-up sports car and a stalled van which can only go backwards down a steep Hollywood hill; it’s jaw-dropping stuff. 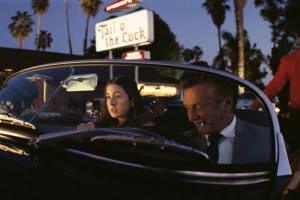 Licorice Pizza finishes with a thoughtful coda about both giving up and/or embracing your dreams, and those who found La La Land’s finale too bittersweet can embrace the full-on romanticism here; the champagne corks really pop in a feel-good finish. But the journey is just as important as the destination, and Licorice Pizza fronts two great new stars in Haim and Hoffman, some wonderful comic turns from some big stars, cool tunes and a warm genial atmosphere that makes it an absolute must see. A stone-cold classic right out of the gate, let’s hope Licorice Pizza is a positive harbinger of a great year to come.

Licorice Pizza is out today, Jan 1st 2022 in the UK and is out in US cinemas now.

Thanks to MGM and Universal Pictures UK for access.