‘These guys take the cake of strangeness,’ exclaims Shaggy (Matthew Lillard) as he attempts to describe the band KISS is this hybrid feature film that really does take the cake of strangeness when it comes to fusing kids cartoons with 70’s glam rock. Yes, this IS a feature-length adventure with Scooby Doo and the gang, and their encounter with KISS, and that sandbox mix of IP’s is often stimulating for pop-culture mavens, as those who saw and enjoyed 2010’s seminal Tom and Jerry Meet Sherlock Holmes can attest.

There’s an obvious match here; Scooby Doo and his gang generally investigate haunted theme parks, a subject previously considered in 1978’s tv movie Kiss Meet the Phantom of the Park. So when fearsome adversary The Crimson Witch appears above one of the rides at Kiss World, a fictional theme park devoted to ‘the world’s hottest band’, there’s only one team suited to this mission. We first meet Scoob and the gang donned in full Kiss make-up, which is something to behold, and they have to figure out what’s going on, with the help of the helpful band KISS, playing themselves in this film which I got from my local library. 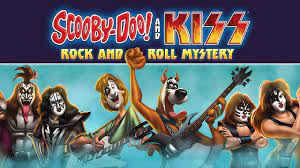 At feature length, the solution has to be more than just an unmasked and disgruntled employee, and round about the 40 minute mark, this narrative ceases to be a solvable mystery and jumps into weird KISS lore; turns out the band are the descendants of ancient warriors from the land of KISSteria, and they are sworn to protect the Rock of KISSteria from the Crimson Witch. This means an all-out psychedelic freak-out that is then revealed to be Shaggy’s dream, or is it?

As a showcase for KISS, this is actually a pretty good juke-box musical featuring a handful of whole songs with trippy visuals that wouldn’t disgrace a Daft Punk feature. There’s also odd adverts for Kiss memorabilia, which is eventually revealed as some kind of pithy satire of consumer tie-ins, which seems a little out of place in a contrived tie-in with cartoon dog Scooby Doo. It’s all mad AF, and kind of resembles the results of the old parlour game Consequences or Mad Libs. Thus…Scooby Doo meets Kiss in a Haunted amusement park. Scooby said ‘We solve mysteries on a cosmic level. ‘Kiss said ‘Ah, spaceman, I heard your approach’ .And the result was, Scooby solved the mystery and Kiss played a celebratory concert that takes the cake of strangeness. The End.