Back in 1984, Gremlins came out the same day as Ghostbusters, and made just as big a splash; these funny, fantasy films seemed to herald a continuation of the Spielberg-ian sense of wonder from ET mixed with shards of dark comedy. And yet while Ghostbusters feels like it’s never been away, with animated series, video games, reboots and sequels, Joe Dante’s Gremlins has spawned only one, the freewheeling 1990 follow-up that’s one of cinema’s great guilty pleasures.

Back in 1984, Gremlins was a big deal, a proper Christmas movie with the inhabitants of picturesque Kingston Falls dealing with a menace that arrives in disguise. An inventor stumbles upon an ancient Chinese man (Keye Luke) and tries to buy Gizmo, a small, furry creature known as a mogwai for his family Christmas. The old man’s son completes the transaction, but when the family get Gizmo out of his box, he turns out to have reproductive powers that enable him to multiply. And when these other mogwai feed after midnight, they turn into the gremlins of the title, devilish, anarchic creatures who smoke, drink and watch old movies while terrorising each other and attacking anyone that crosses their path. 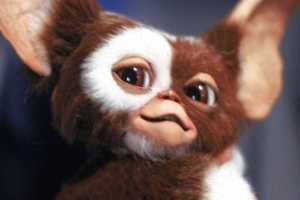 The central characters here are Billy (Zach Galligan) and Kate (Pheobe Cates), whose romance grows as they fight off the critters; Kate’s monologue about her father’s festive death helps set a deliberately uneasy tone. Not everything about the gremlins is clear; are they aliens, ancient creatures, or what? The word mogwai derives from the Cantonese for devil, and the Chinese lore is that they are demons who reproduce when brought into contact with rain, but surely the cute Gizmo can’t be as bad-ass as that; those literary enough to have read the novelisation will know that these ARE aliens. But such backstory hardly matters when this ‘gift of the mogwai’ continually ups the ante in terms of the cartoonish action; the gremlins are genuinely fierce, the puppetry and creature designs are fabulously grimy, and Gizmo’s heroics are nicely inspired by his love of watching old movies. 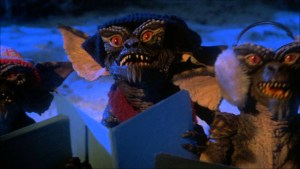 Gremlins is decidedly non-PC by today’s standards., and it’s easy to see why audiences were fascinated but also horrified by the violent results; the sequel really develops the satirical edge required to make this kind of thing land, and there are moments here that go too far in search of a laugh. But Gremlins is a somewhat neglected film in 2021; hopefully the proposed new tv show will rekindle the mogwai spirit for a new generation to come.