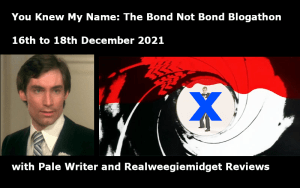 Sidney Sheldon was one of the bestselling novelists of the 20th century; a couple of decades later, his work has largely been forgotten. The Naked Face was something of a breakthrough novel when published in 1969, with a prescient theme involving psychological profiling in murder cases. By 1984, Sheldon was considered more to be a writer of trashy blockbusters like Masters of the Game rather than a mystery writer, but The Naked Face is a well-plotted thriller, carefully adapted by writer/director Bryan Forbes and featuring a rare serious role for Roger Moore, and that’s why I’m publishing it as part of the mighty Bond Not Bond blogathon.

Roger Moore plays Judd Stevens, a Chicago psychiatrist who gets an unpleasant visitation from two cops (Rod Steiger and Elliot Gould). They’re investigating the murder of one of Judd’s patients, and there’s bad blood from a previous encounter when Judd’s testimony got a cop-killer out of a potential jail sentence. Judd refuses to let the police see his confidential files, which only further antagonises them, and turns to an eccentric private detective (Art Carney) to clear his name.

The Naked Face was part of Cannon’s attempts to move from distribution to high-end film-making, and it found few takers on release, perhaps due to a lack of advertising spend. Steiger shouts a lot, while Moore underplays, and yet the result is quite compelling in places; there’s enough red herrings and plot-twists to divert the mind from Moore’s awful raincoats, smoking jackets and elbow patches. Sure, we don’t always want to see him in safari suits and tuxedos, but Moore deserves a bit better than this…

The Naked Face is an old-fashioned, dialogue-heavy thriller with good location work; forgotten now, it’s worth exhuming for fans of the mystery genre. The appearance of John Kapelos, the janitor from The Breakfast Club, should be a clincher for cult-movie fans attracted by the Oscar-heavy cast. For classic Moore, check out The Man Who Haunted Himself, his best performance by far, but he’s good enough here to be going on with even if he’s really not Bond at all..