Even, or perhaps especially, critics make mistakes. I get at least a dozen films a day offered up for review, and due to time constraints, most of them don’t get a response. There’s only so many hours in the day, and sometimes decent looking films just can’t find a way into the daily schedule. So I’d like to apologise to publicists around the world who thought that I would like Even Mice Belong in Heaven, a stop-motion Czech animation by Jan Bubenicek and Denisa Grimmová. It was only when the film won a Best Animated Film nomination at the 2021 European Film Awards that I sat up to pay attention, and I was glad that I finally did.

Living in the countryside, I’m not a huge fan of foxes or mice, the fresh corpses of both require regular disposal. So Even Mice Belong in Heaven gets points for opening up with a realistic scenario; Whizzy the mouse and Whitebelly the fox are mid-chase when they get hit by a car and find themselves in a heaven for animals. With plentiful company and carnival rides, there’s no shortage of fun things to do here; the vision of Iva Procházková’s book is one that should be comforting for children and adults alike. Whizzy has issues about fear and anxiety, and wanted to seem brave to her friends by standing up to the foxes that prey on their species. But Whizzy and Whitebelly become friends in the afterlife, which begs the question; what will happen to their game-changing friendship if and when they return to the meadow from which they came?

It’s been a long time since I’ve set eyes upon a children’s film that’s as flat-out moving as Even Mice Belong In Heaven; the conflicts are as well-developed as you’d hope for in a Pixar movie, and the dubbing, script, voices, puppetry and animation are all on point with telling a poignant story. This is a story about how each generation have the opportunity to throw off the prejudices of the previous one, and while there’s a reassuring message about being your own person, mouse or fox, there’s also a welcome shot of idealism; we don’t have to accept past failures as defining us. 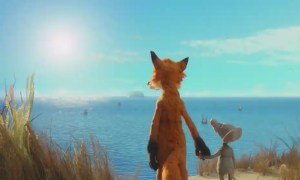 Spoiler alert, the film’s last ten minutes are wonderfully imaginative and poignant; in a crustacean cinema inside a giant whale, Whizzy watches a film of the story of her life, then slips next door to watch the film that Whitebelly sees that details his own story. That transformative experience of understanding exactly where someone else is coming from is beautifully expressed through this simple metaphor, and sets up a tear-jerking (but never sad) finale in which Whizzy and Whitebelly recognise each other as permanent friends through the ages. Every year there’s a slew of new feature animations with little to distinguish them from the pack; Even Mice Belong In Heaven is an exceptional example of a film that should work for tiny kids and sensitive grown ups alike.

Even Mice Belong In Heaven is out now in the UK and hits US theatres on Dec 10th 2021.