As a kid, my favourite comic was called Donald and Mickey, with licenced Disney content that’s easily guessable given the title. But that title changed to Mickey and Donald; someone within the Disney organisation obviously negotiated a more favourable billing for the mouse as Disney’s MVP. Such internal company machinations were lost on me at the time, but I was more impressed by the poster for The Island at the Top of the World which appeared on the back cover, a big scale epic with all sorts of airships, fireballs and volcanoes.

Based on Ian Cameron’s 1961 book The Lost Ones, this 1974 adaptation is by Joss Whedon’s grandpa John, and fills a brisk 93 mins with incident. Action men don’t come more barrel-shaped than Donald Sinden, and he’s the unlikely hero here as Sir Anthony Ross, the leader of an expedition to the North Pole; David Hartman is John Ivarson, the token Yank along for the ride, and the mission is to rescue Ross’s son, who has gone missing but left behind a clue to the whereabouts of a whale’s graveyard. It’s 1907, so transport options are limited; fortunately posh Ross has just bought a fabulous airship called the Hyperion, and it’s this mode of transportation that takes them to a land inhabited by Old Norsemen…. 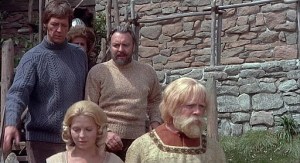 …but NO monsters are included, and presumably that’s why Robert Stevenson’s film didn’t click with the audiences in the way that Disney expected; a full-sized mock-up of the Hyperion had been planned to be a big attraction at Disneyland. This was back in the days when films inspired Disneyland rides and not the other way round, so the adventure is very old-school, with polite listening to tribal decisions, and team-building with the local natives. ‘I want to speak to the man in charge’ says Ross with characteristic British bumptiousness. Japanese-American star Mako is the token racial sop, playing Oomaik, a Norseman; I guess that ethnicity was close enough for the casting director to get behind. But such quaint and dated aspects aside, it’s the effects that are the big draw here; Peter Ellenshaw drew some outrageously detailed glass paintings, and while the blue-screen work is rather of its time, the action shots of the Hyperion wouldn’t disgrace a 2021 Marvel movie; watch till the end before you judge because there’s some genuinely gorgeous shots of the Hyperion in flight.

Robert Stevenson, the director of Mary Poppins, doesn’t even try to lean in for a family audience; there’s no cute kids, or slapstick comic relief; a stowaway dog is as much as he offers to restless kids. The Island at the Top of the World is a nice film to revive; sure, it’s very 20,000 Leagues Under the Sea, but it’s a nice variation on that traditional text. Once you’ve recovered from the lack of monsters, it’s a rollicking old-school adventure that favours old-school adventurism over the calculated, commercial nature of some of Disney’s sillier products of the time.