One of the first films I can remember seeing, Carry on Screaming is a British television staple, the longest and probably the best of the 30+ Carry On films that are a central tenet of understanding everyday life in the UK. Mention of “frying tonight!’ or Dan Dan the Lavatory Man to this day, and most people know what you’re talking about; while it might lack the kind of satirical set-piece that Carry On Up The Khyber boasted for a kilt-raising climax, Carry On Screaming is an accessible spoof of Hammer Films and a particular kind of Gothic storytelling.

In an Edwardian world where both Frankenstein and Dracula exist, young women are going missing; the glam Valeria (Fenella Fielding) knows the secret. Valeria and her brother Dr Watt (Kenneth Williams) are capturing the girls, then covering them with plastic and selling them to local department stores as mannequins, and their overall goal is to re-animate Rubbatiti, an Egyptian mummy. Stealing Doris (Angela Douglas) under the nose of her fiancé Albert (Jim Dale) alerts the authorities, and soon detectives Sydney Bung (Harry H Corbertt) and Slobotham (Peter Butterworth) are making their way to the sinister mansion where the girls are being taken for this nefarious purpose…

Either Carry on Screaming has changed since I saw it at five years old or I have, because what once seemed like an intense, grisly horror film to my innocent eyes is now clearly a very camp, very silly film. With Sid James otherwise engaged in panto, the late Fielding was anything but a like-for-like substitute, and her wonderful enunciation is something to behold. The monsters she commands, Oddbod One and Two, are genuinely disturbing creations, with huge bulky physiques, massive sideburns and pointed teeth, and their indestructible nature is still disconcerting. 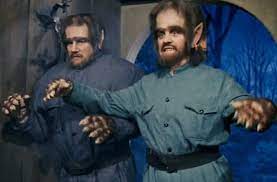 Making fun of a particular film genre sits well with the Carry On ethos, and for once, innuendo is kept at a minimum, and the support turns from Frank Thornton, Joan Sims, Jon Pertwee and Charles Hawtrey are confident; the latter’s Dan Dan the Lavatory Man is a definitive portrait of a toilet attendant. This is peak Carry On, with a decent period production, a mixture of better-than-average gags, and memorable performances. Fielding was one of British society’s great characters; she reputedly announced to an incredulous audience at a dinner party that she was taking driving lessons, despite being rumoured to be blind as a bat. ‘I’m going to have the windscreen made of prescription glass…’ she explained in her inimitable voice.