‘The magical film that haunted the dreams of a generation’ runs the ad-line for this blu-ray release, the first time that this notorious Brothers Grimm adaptation has been released in this format. ‘The scary AF East German fantasy that freaked out millions of unwary children’ would be just as accurate, because this is indeed the same uncanny film that the BBC used to make a staple of their kids programming in the 70’s and 80’s. Like many others younglings, I sat down to watch this classic tale of princes, princesses and trolls as a nipper and was utterly weirded out; would the Singing Ringing Tree, now presented in widescreen and full-screen formats, seem so bizarre decades later?

In a word, yes. Pioneering edge-lord Francesco Stefani’s film for the DEFA film unit is very studio based, but that didn’t stop them from coming up with a fairly unique and imaginative manner of staging that’s light years away from today’s green-screen laziness. An unnamed prince (Eckhart Dux) seeks the hand of an unnamed princess (Christel Bodenstein), but there’s a catch; she’s one of the most awful people ever seen in cinema. She’s haughty, rude, thoughtless and selfish; it’s not entirely clear why anyone would want to win her hand. The prince seeks to woo her with a gift in the form of the Singing Ringing Tree, but has to make a deal with an evil dwarf to get it, and when the princess rejects the prince, the dwarf’s spell turns him into a bear. And when the bear carries off the princess, she becomes ugly on the outside as reflects her terrible personality, and…. 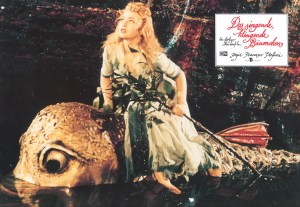 By now, you’re maybe getting the picture; this ain’t Disney, or Pixar, but there’s a hard, downbeat take on the traditional fairy story. Compellingly played by Richard Krüger, the dwarf is a malevolent creature without any positive features; he’s a proper troll who even lives under a bridge and plots all kinds of misfortunes for those who cross his path. Notably, there’s no redemption arc for the dwarf, with the casting here reflecting fears and misunderstandings concerning disability back in the 1950’s, but it’s hard going even for the prince and princess, who are eventually redeemed by their love of nature. A giant fibreglass fish with googley-eyes plays a part, but there’s also doves and all kinds of animal co-stars that must have been a nightmare to harness in an East German film studio.

The Singing Ringing Tree probably isn’t as frightening now as it seemed back in the day, but it’s still disturbing; the alien quality of the presentation, the evil dwarf, the strangely off-key score, everything is off in a disconcerting way. A great Christmas present for anyone who had their mind blown in their childhood, this revival is a first chance to see and share this eccentric, widely seen film on today’s technology; it’s a mind-melting trippy tale that’s become an unlikely classic of fairy-tale storytelling.And yes, things worked out happily for both the prince and the princess; at the time of writing in 2021, both Dux and Bodenstein are happily still with us….

The Singing Ringing Tree is now on Blu-ray 18 October 2021 from Network in the UK.