The last of the four Monty Python feature films, The Meaning of Life has the reputation as the least. The Pythons had developed from sketch comedy to the episodic spoof on Arthurian lore in Holy Grail, and the purposefully sacrilegious Life of Brian was their most coherent film. Splits between the group, as writers and performers, meant that The Meaning of Life felt somewhat unfinished, a series of sketches loosely based around the titular concept. While frustrating for fans, the best bits are inspired; it’s just a shame that the framework really doesn’t hold here other than as an excuse for a series of random pot-shots at various sacred cows.

Watched on Amazon Prime in 2021, it’s nice to see the accompanying short, The Crimson Permanent Insurance, a very Terry Gilliam concept in which a group of accountants set sail for a life of adventure. It’s an imaginative and beautifully realised sequence, with a substantial call-back later in the film. But consistency is a problem, and the first sketch, on the Miracle of Birth, barely lands. From here, it’s a mixed bag; a brilliant religious lampoon, featuring the Oliver! type song and dance number Every Sperm is Sacred, ranks up with the team’s finest moments. With street-urchins dancing with chimney sweeps, it’s an adept satire on movie musicals, and is performed with gusto by Michael Palin and Terry Jones. 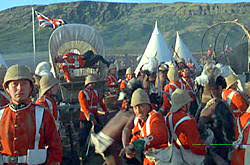 Also on the plus side is a sex-education lesson with John Cleese as an exasperated master, a spot-on Noel Coward parody by Eric Idle, and an amusing tale of stiff-upper lips amongst British officers during the Zulu wars; this sequence of particularly interest to me since it was filmed outside my front door in the quaint Scottish village of Blanefield, with the green Campsie mountains providing a visual doppelganger for the verdant plains of Africa. But without upsetting fundamentalist Pythonists, I’ll have to admit to being no great fan of the Galaxy song, Mr Kreosote, Death or some of the other featured routines; the intention to shock seems to have overtaken the desire to amuse, and there’s some regrettable cheap titillation.

If The Pythons are The Beatles of sketch comedy; The Meaning of Life is their Let It Be, which is to say the most remarkable thing about it is that it exists at all, since the key participants were hardly on the best of terms when it was made. It’s probably best enjoyed as separate clips on YouTube, or with liberal use of the fast-forward button, although Palin’s final summing up of the meaning of life still holds plenty of meaning in 2021.