Yes, it’s Gerry Butler time again, and to celebrate in style the release of his new movie Copshop, which the pesky virus has dissuaded me from seeing on the big screen at this point, it’s a chance to look back at this remarkable off-the-ropes sequel which somehow conspired to be better than the two preceding films (Olympus and London Has Fallen) in this franchise put together.

Secret service man-mountain Mike Banning (Gerry Butler) is a burnt-out case. His health is failing, his emotional range is narrowing, he barely recognises his own wife. Of course, that could be because she’s not played by the same actress (not Radha Mitchell, now Piper Perabo) as in the first two films, but despite such domestic wobbles, Banning’s loyalty to the President is unshakable. Ex-president Aaron Eckhart clearly didn’t fancy a third outing in this franchise either, so popular voice-over artist Morgan Freeman is hurriedly sworn in as Commander In Chief Allan Trumbull for Ric Roman Waugh’s cheeky, entertaining film.

In a topical political coup, Trumbull comes under attack from an airborne army of explosive drones, and in the eyes of the authorities, Banning is linked to this treasonous act of terrorism. Fleeing the scene, Banning hides out with his estranged dad, played by Nick Nolte in a full Yosemite Sam/Dirty Santa/prospector peeing–through-his-knee length beard get-up (‘I don’t do medication,’ says Nolte, in a knowing wink to the audience). Banning and his dad set out to find out who was responsible, while tough-nut FBI agent erm, Jada Pinkett Smith is in hot pursuit in the style of The Fugitive. 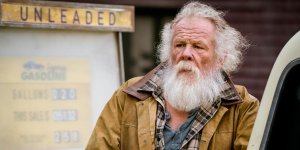 Although various personnel have jumped ship, Angel Has Fallen is easily the best of the trilogy, and arguably Butler’s best action film yet. Decent support (Danny Huston, Tim Blake Nelson) and improved action scenes including a truck chase through a forest, and a slam-bang shoot-out in a high-tech hospital climax that really delivers the goods. And hewn-from-granite leading man Butler is the happy centre that a straight-forward action movie requires; lily-livered liberal film critics may scoff, but a big man, a big gun and instant justice should ensure Angel Has Fallen is a guilty AF pleasure for all sides of the political spectrum.