Last week, I had the honour of taking part in a short but crucial discussion on the topic of women and literature; as has become customary on this blog, I have provided a link below for those inclined to listen. The interviewer is radio and television legend Jackie Brambles, a name synonymous with the transformative effects of girl power, we chat about talents as diverse as Joan Didion and Jackie Collins and the business end of our chat comes around the 1.51 mark.

In other news, today is my birthday, and I’m happy to use the mouthpiece of this blog to celebrate by thanking the many commenters who have taken this humble discussion of film, streaming and television to undreamt of heights in terms of readership. Last week’s Black Widow review was the most popular WOR review to date, and the increased content reflects the growing audience. Thanks to the PR’s who supply new and vintage films, thanks to the intrepid film-makers who contact me directly with unheralded gems, and thanks to the readers and commenters who make my day with their erudite and often irreverent responses. 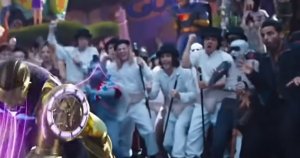 It’s a day to feel old, but nothing makes me feel older than hearing that Warner Brothers have included, as part of Space Jam: A New Legacy’s cast of beloved animated characters, bowler-hatted street-gang The Droogs, as featured in Stanley Kubrick’s film A Clockwork Orange. That’s a Warners film, and the studio’s IP presumably allows them to do this legally, but morally it’s something of a shock.

Writer Anthony Burgess created the Droogs as a direct result of an assault on his pregnant wife, and Kubrick withdrew the film specifically because he was concerned about these elements of the film being taken out of context. Throwing these literary characters into a children’s film is the height of tone-deafness; this isn’t about cancel culture, but our responsibility for treating ideas and people with respect, particularly when authors are no longer around to defend the use of their intellectual property. I’ll not be reviewing Space Jam 2 out of protest; I doubt that minor snub will cause much of a stramash, but any budding creatives considering working with Warners should take note of this astonishing act of crassness. However personal the characters you create might be, you can expect to see them chucked into a Space Jam movie one day for sh*ts and giggles.