The future is so bright, we gotta wear shades, that’s how eye-burningly awful things are looking right now in 2021. A drive towards change, specifically through technology, is part of the reason why; you’re reading this now on one of several screens that you use to navigate your day. Back in the late 60’s, author Alvin Toffler experienced pangs of anxiety about what our lives might end up like in the future; this 50 minute film enlists truth airship Orson Welles to patiently explain it.

Being Orson Welles, even the end of the world is a matter of lip-smacking relish and coy smiles at the camera; we see him striding through an airport concourse, through a cultivated set of grounds, barrelling through the doors of a chateau. As he does so, Welles warns us about the future, about androids, about AI, about people trying to change sex, and there’s even a suggestion that in the future, people of the same sex who love each other might even get married. These same people might also desire to change skin colour; there’s an arrestingly wrong shot of an elevator spilling out passengers of garish man-made skin tones. What next?

Future Shock doesn’t get everything right; their best attempt at a sinister, threatening android is a CPR dummy. And it’s hard to see these computers as much of a threat to our everyday routine, given that they’re the size of a Portakabin. But Toffler’s core thesis still feels bang on; we’re not paying enough attention to what we’re changing about our lives, and why that rate of change is accelerating. Welles made some howlers, but at least you could generally see the logic behind his choices; while this is no F For Fake, Welles makes an agreeably shrill Cassandra for 50 mins. 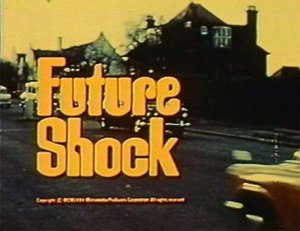 One clip gives a taste of the typically ‘almost but not quite’ ideas; a couple are shown who plug themselves into various sources as they start their day. Of course, we don’t all have jack-plugs at the back of our heads, yet, but our forefathers would be horrified to see the emphasis our modern life has on charging, batteries and essential wifi. We may not be plugging our bodies into the net just yet, but wearable tech is a thing; the point is that Toffler got more than enough pieces of the jigsaw right to make Future Shock a watch. It’s fun for ironists, sure, but the underlying assumptions about the dangers of change have proved correct, and we’re the ones left struggling for air.