The familiar story of the dangers of scientific experiment, as written by Robert Louis Stevenson, but every classic story needs a new angle, and this Kirk Douglas version has a fairly USP; it’s a musical. And not just any music, but the tunes of Lional Bart, whose tunes made Oliver! a memorable Oscar winner back in 1968. There’s some debate over the provenance of the selection of aspiring show-stoppers featured here, there are suggestions that these songs are off-cuts from that Dickens musical; either way, it should be said that the songs here are really quite catchy, particularly the opener.

Douglas clearly fancied this; his own production company were responsible, and generations who grew up on his sea-shanties in 20,000 Leagues Under the Sea will know he’s got the pipes. But this is a fairly off-message take on Stevenson’s story, with mild-mannered Jekyll transforming into hairy-handed Hyde, but romance is central to the story rather than mystery. Want to see Jekyll sing a song about buying and riding a bicycle to see his lady-love? Well, there’s a link at the bottom of this article, so this is your chance… 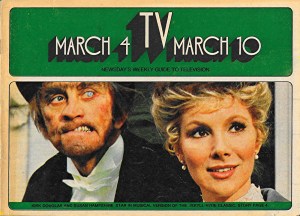 The support is a mixed bag; Jekyll fancies Susan Hampshire, but is drawn to the blowsy actress well played by Susan George. Michael Redgrave does well with his song, as does Donald Pleasence, hardly the first name one thinks of in musical theatre but more than holding his own here. There’s also plenty of strange deviations from the text; Hyde visits the Houses of Parliaments and flings rotten tomatoes at the speakers, a fairly high-profile form of public dissent.

There’s a particularly striking and original scene in the final stages of David Winters’ film, shot cheaply on videotape, in which Jekyll and Hyde appear simultaneously in the same room, reflecting the doctor’s tortured state of mind. That’s a cool idea, and would work in a more horrific treatment, but this is more your lush, chocolate-box Sunday afternoon musical. Those who hate musical theatre should stay away, but fans of Bart’s work, and even his offcuts are tuneful, might want to avail themselves of this forgotten novelty, featuring a genuinely Jekyll and Hyde performance from Douglas.