It’s June 2021, and the United Kingdom is very much riding the crest of a wave of manic interest in the writings of Jackie Collins; later this week, I’ll be examining Lady Boss, a feature-length documentary about the sister of Joan who redefined the bonk-buster with The Stud, The Bitch and a number of other mind-curdling entries in the so-bad-it’s–good file. By way of a warm up and half-time orange, let’s examine an earlier effort, 1979’s Yesterday’s Hero, often the tattiest box in an 80’s video shop, now reaching a new, appalled audience on streaming.

British sports movies featuring self-destructive heroes were always a thing, from Lindsay Anderson’s This Sporting Life to the Oscar-winning Chariots of Fire, but Yesterday’s Hero is more like Rocky unwisely transplanted into the dismal world of the FA cup. It’s in this muddy realm that we meet fading striker Rod Turner (John Wick’s Ian McShane), whose past glories are some time behind him and now lead him to professional alcoholism. Elton John-surrogate pop star Clint Simon (Paul Nicholas) has just bought a football club called The Saints, and seeks out his boyhood hero to give him one last shot at glory. But Clint Simon’s current lady Cloudy Martin (Suzanne Somers) still has a hankering for Rod, and a love triangle develops. The manager of The Saints, Jake Marsh (Adam Faith) suspends Rod for drinking whisky during half time, leading to a double training montage and a triumphant super-sub appearance in no less glamorous an event as the FA cup final itself.

Can Clint Simon ever forget Cloudy Martin and find true happiness? Apart from some of the strangest names ever committed to celluloid (one team are described as Leicester Forest), Yesterday’s Hero has plenty to offer seekers of insanity and inanity in different measures. McShane at least looks the part with his shirt hanging down, short-shorts and muddy boots; his father apparently played for Manchester United. But there’s not much he can do in a film that stops on five different occasions to shoe-horn in ‘musical ‘’duets” between Nicholas and Somers, plus a inflammatory disco inferno number in which Cary Elwes predates his later Saw hell by being pictured dancing to the music of The Dooleys. No film is so tightly written, not even No Country for Old Men, that it could survive five complete Paul Nicholas soft-rock duets being added to the narrative, and Yesterdays’ Hero offers an agonising death rattle than can be heard from space. 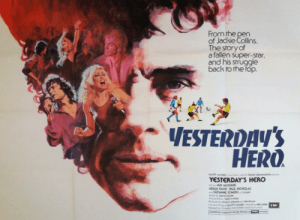 I had previously thought that Rocky IV’s following up of one training montage with a second identical training montage was a low point of the sports genre, but Yesterday’s Hero manages the same trick some years earlier. Director Neil Leifer clearly knew or cared nothing about what he was doing, and the climactic FA cup final scene is a genuine cinematic debacle. Filming a real football match, then inserting close-ups of the actors pretending to play has never been pulled off successfully, and it’s obvious why; the shots simply don’t match. Unless footballers regular change ends seven times during a game, the manner of the filming should provoke hilarity for audiences worldwide; even the 100 minute documentary Lady Boss doesn’t even mention this film once, and there’s a good reason for that. The DVD on Amazon below is a snip at just £34.99.