Studio Ghibli dabbling in computer-generated storytelling has gone about as well in the public eye as Bob Dylan going electric, which is to say not so well. Gorô Miyazaki’s adaptation of the novel by Diana Wynne Jones, author of Howl’s Moving Castle, has been roundly condemned by many self-appointed keepers of the Studio Ghibli flame. Don’t get me wrong; I absolutely love the old Ghibli style, but these movies will always be there, and it’s nice to have a few changes made to the patented hand-drawn style that so many of us know and love. Earwig and the Witch is unlikely to make us forget the highs of Spirited Away or Kiki’s Delivery Service, but in terms of animation in 2021, it’s very much of interest to young and old alike.

In a film made for and shown on Japanese television last year, Earwig (Taylor Paige Henderson) is introduced left on the doorstep of St. Morwald’s Home for Children by a mysterious red-headed figure, who promises to return. The red-head is Earwig’s mother (Kacey Musgraves), who used to be in a rock band, but is now in trouble with a group of twelve witches, although we don’t see their struggle in this film. Instead, we see Earwig’s cosy home life with her new, adoptive parents, Bella Yaga (Vanessa Marshall) and The Mandrake (Richard E Grant). Earwig seeks to learn magic and bring the couple under her control, but it turns out that Bella and the Mandrake used to play in her mother’s prog-rock band, and her adolescent rebellion falls short, leaving an opportunity for reconciliation with her adoptive parents, and her mother.

The CG used here doesn’t have the look of classic Ghibli, nor should it; Earwig and the Witch is made on a far smaller budget and with a greatly reduced crew. But true Ghibli fans will note the gorgeous detail in the backgrounds, the obsessions with cooking and eating, the great expressiveness of the character faces and remarkable designs, and best of all, Thomas the cat, played by Dan Stevens and bringing back memories of Jiji, the classic feline from Kiki’s Delivery Service. And that’s high praise, since Jiji is one of cinema’s greatest cats. 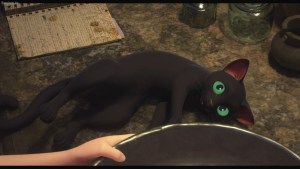 Both kids and adults may be frustrated that Earwig’s adventure is more about uncovering her past rather than discovering some new land or dimension, and there’s an issue of quelling expectations here; the book that Earwig is based on seems somewhat unfinished. But it’s worth remembering that the Ghibli adaptation of the same author’s Howl’s Moving Castle pretty much used that book as a jumping off point for a huge airship and zeppelin anti-war narrative. So maybe Ghibli owed it to the author to keep things stripped back and simple this time; there is a longer version intended for future release soon. Earwig and the Witch demonstrates that today’s Ghibli can mix old ingredients with new, and even if it doesn’t threaten to compete with our revered favourites from the giant Totoro to tiny soot monsters, Ghibli time will always be a time of celebration for those who love the world of imagination and animation.

Goro Miyazaki’s EARWIG AND THE WITCH is out now on DVD and Blu-ray via Amazon in the UK on the link below.

Thanks to Zoe Flower and Elysian for access to this feature.