If you ain’t got pictures, it didn’t happen,’ said an uncouth commenter decrying some garment-touching celebrity story on my blog the other day; it seems that in the digital age, the art of telling a good story is secondary to snapping an intrusive photograph. Yet some of us hate snap-happy photography with a passion; the shutter falls like a guillotine on a precious moment, killing it instantly, in my experience. Christos Nikou’s film is precisely about that question of what makes a memory; is it an artefact, or a feeling, or what?

Sure, this is an art film, from Venice 2020 and a debut from a Greek director, but it’s also a type of film that we’ve seen before; the idea could have come from Spike Jonze or Charlie Kaufman, and it’s easy to imagine the film remade with Steve Carell and Aubrey Plaza. In an alternate universe, a virus has decimated the world, causing instant and total amnesia for the victims. Aris Servetalis plays Aris, a man who finds himself sitting on a bus, having no idea where he came from or where he was going, knowing only that he likes the taste of apples. Recovering, he takes part in a government assistance programme that encourages people to make their own memories, and become happier human beings for having a firm sense of their own identity. Couched by a voice on a tape recorder, Aris has one-night stands and plans parachute jumps, and is armed with a Polaroid camera to capture the moment for his memory book. Things get complicated, however, when he meets a young woman doing the same… 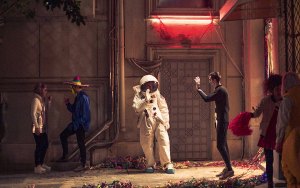 Nikou does a neat job with the film’s conception; the technology is very late 70’s, with no smart-phones or computers, just lo-fi. But that’s not to say his film avoids the here and now; right now, many of us are crawling back out of lockdown, trying to remember who we used to be and how we used to act, and Apples couldn’t be more timely. Like the Blade Runner movies, Apples asks; what are we that is more than just our memories, what is it that makes us human? And the answer that it comes up with feels agreeable and well-worked. There’s also lots of fun on the edges, like getting locked out of your house, or wandering around a multi-story car-park when you lose your bearings.

Apples is billed as a comedy, but this ain’t Ghostbusters, it’s art, so there’s a lot of net curtains and men pensively eating fruit. That said, there are some very funny sequences, a static shot of a man on a diving board in a communal pool that’s universal in the way that a Benny Hill sight gag would be. And there’s a deft costume party in which Batman suddenly gets carted off in an ambulance, leaving Catwoman unexpectedly single; moments like this have a silliness which could come straight from 80’s tv comedy Russ Abbott’s Madhouse. Apples is a minor gem, an art house film that punches well above its weight when it comes to identifying a few truths about the human condition, and what makes us who we are.

Thanks to Curzon for advanced access. See this movie from May 7th 2021 in the UK via