We haven’t had a good hate-watch for a while, but the 1973 version of Lost Horizon raises the hackles from the get-go. Sure, the early 70’s was the progressive era of Cabaret, The Godfather and The French Connection, but it was also an retro time that turned unsuccessfully to Old Hollywood for inspiration, and producer Ross Hunter’s success with the Airport movies suggested that a return to that grand style would chime with audiences hungry for nostalgia. Fortunately for everyone, paying punters stayed away in droves, leaving Lost Horizon as a verboten, boarded-up Shangri-La for contrarians like myself to revel in the on-screen idiocies.

The plot is familiar enough. Richard Conway (Peter Finch) leads a party of Westerners from a war-torn airstrip to another war-torn airstrip, and then eventually into a plane crash which strands the group in the mountains. There they find the world of Shangri-La, and who better to preside over this happy world than Chang, played by the famous Chinese actor Sir John Gielgud. Some of Conway’s group are still wrestling with malaise, notably Catherine (Sally Kellerman). When she contemplates suicide from her room’s balcony, wily old Chang busts in and somehow finds the soothing words that any despairing woman would want to hear, and she’s quickly talked round. 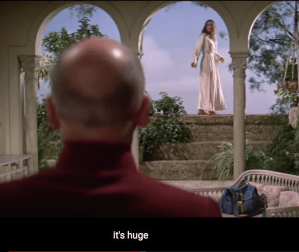 Charles Jarrot’s film wasn’t just a bad musical; it pretty much killed the tradition of the all-singing, all-dancing road-show presentation, a money-spinner from the days of Mary Poppins and The Sound of Music. These films were less than a decade old, but the magic had gone in the wake of The Graduate and Easy Rider and a general sense of counter-cultural malaise. Lost Horizon puts one wrong foot after another as it tries to pour new wine into old bottles; Burt Bacharach is a great song-writer, but his work here feels terrible. Songs like Russell Crowe look-alike Bobby Van’s mind-scrambling Question Me An Answer? and anodyne anthem Living Together, Growing Together have all the relaxing quality of tin foil between teeth, and Bacharach himself felt that the film nearly ended his career. Stars like Peter Finch and George Kennedy clearly don’t have the chops to perform, with Kennedy not vocalising at all, and Finch’s voice overdubbed while the actor prowls around the set closed-mouthed. In fact, most of the cast don’t actually perform when it comes to the music; as Bette Midler quipped ‘I never miss a Liv Ullmann musical’. This makes for a long, tedious wait until Michael York finally and unwisely decides to take his new girlfriend back to civilisation with him…

Amazon may have over-estimated my interest in Lost Horizon by trying to flog me a hard-back copy for the less than competitive price of £145. To be fair, this version does eventually regurgitate an interesting moral about the fragility of happiness, but the weight of the film is so soul-crushing, it’s tempted to feel elated just because it’s over. A farce, a farrago, and a disaster, Lost Horizon has the reputation of a complete turkey, and even the most revisionist viewer can only reach the same conclusion; this ain’t no Shangri La….