It’s Oscar-weekend, so a great time to look back at the feted performers we associate with great acting and ground-breaking performances. Yes, you guessed it, we’re looking at Mr T and his 80’s movie Street Fleet….

Just to keep you on your toes, I’m using the UK title for this celebrated venture of cinematic powerhouse Mr T; in the US, this was better known as DC Cab, but the slicker Street Fleet was how it was billed at my local flea-pit back in 1983. While no masterpiece, Joel Schumacher’s film has a number of unusual selling points, not least feeling like a throwback to situational comedies Car Wash and Drive In, but also a precursor of slobs-make-good hits, Police Academy and Ghostbusters.

Fresh for his breakout performance in Rocky III, Mr T brings all of his formidable acting chops to bear on the role of Samson, who works for a down-at-heel Washington yellow-cab company, run by Max Gail from tv show Barney Miller. The cars are dirty, the bosses don’t have the sense to pay-off criminal elements, and the cabbies are demotivated louts; it’s worth noting that Mr T isn’t even the toughest element here, that award surely going to The Barbarian Brothers who take on the rough-housing duties which might be expected of the star. Rookie Albert (Adam Baldwin) turns up at DC Cabs and starts to turn the place around, and a random political kidnapping gives the cabbie ensemble the chance to redeem themselves and prove that they’re good guys after all. 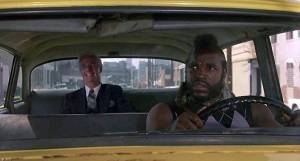 That synopsis doesn’t sound so amazing, but look at the extras here. Street Fleet is photographed by Dean Cundy, warming up for Back to the Future. The Gruber-Peters production company had just produced Flashdance, and Irene Cara has a cameo here as herself. Cara supplies a new song, and the whole soundtrack is the work of Giorgio Moroder. Others caught in the crossfire include conservative talk-show host Bill Maher and, (spins-the-random-wheel of casting), there’s also reliably bananas support from perennial madman’s madman Gary Busey.

Street Fleet may follow in the shadow of Scorsese’s Taxi Driver, but it’s a rather looser, sunnier view of the profession, sporting a semi-improvised feel that seems like it was assembled from a collage of workplace anecdotes, some of which are still amusing; the climax involving smashing a vehicle through the screen of a drive-in is novel enough to pass muster. Seeing the cast of (semi) celebrities dancing in a city parade over the final credits feels like the right way to end; back in the 80’s, all you needed was a few cameos, a few half-remembered funny situations, plus Mr T, and you have a movie right there. So get your jaxy in a taxi and head over to the world of Street Fleet/DC Cab, an inessential but inoffensive hang-out movie. And I truly pity the fool who feels otherwise…