Spotting Jenny Agutter’s face somewhere amongst the chewing-gum Bayeaux tapestry of The Avengers was something of a culture-shock; back in the early 70’s, she was a go-to girl for iconic British cinema, from Nic Roeg’s Walkabout to The Railway Children. David Greene’s I Star Counting! probably wasn’t one of her better-known flicks, but this restoration from the BFI corrects that omission from the public consciousness. A taut, subversive thriller with a disturbing edge, I Start Counting! is a far more important film that its reputation suggests, and has decidedly modern content that chimes with the female advancement theme in recent productions The Undoing and Promising Young Woman.

In a Mary Mungo and Midge-era, Britain is under-construction, a mix of high-rise flats and soon-to-be-demolished pre-war housing, Wynne (Agutter) is an adopted daughter, who has a crush on her non-blood relative brother George (Bryan Marshall). She gives him a carefully-chosen jumper as a sign of her affections, but later discovers it in a bin, covered in blood. Wynne refuses to seek help from her family or authorities, but seeks to be an accessory to a crime that she cannot quite imagine. Is George the serial killer who is murdering young girls in the neighbourhood? Whatever the solution is, Wynne starts investigating the morals and suspicious behaviour of the men in her life, including the bus conductor (rather improbably played by Simon Ward in his first screen- role), but her fantasies may be blinding her to the grim realities of life, which overtake matters in the most tragic way imaginable. 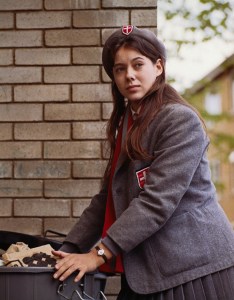 Adapted by Richard Harris from a book by Audrey Erskine Lindop, I Start Counting! has a novel line of inquiry; a story of sexual development and education with a precocious main character and a cruel, jagged punch-line. Wynne imagines the worst about men, but is also quick to adopt the complicity about covering up men’s abuses that she imagines to be a grown-up response. ‘They want to learn about it now,’ one character observes, but Wynne’s thirst for knowledge comes at a price; George humiliates her when she attempts to view his illicit activities, and she ends up making a spectacle of herself while on drugs. British cinema has rarely went down the road of teen movies, but if it did, the scabrous content of Greene’s film gives some idea of where it would have gone.

Possibly screened once on British television before being deemed too hot a potato, I Start Counting! is something of a shocking omission from the British cinema canon; well shot, intelligently positioned, and startlingly well performed by a young Agutter, this daring film lands somewhere between Whistle Down The Wind and Disturbia. George sees Wynne as no more than a ‘funny little biscuit’ but she’s more worldly than he realises; in a surprisingly modern church, she tells a local priest that ‘exchange is commerce’ when it comes to the exchange of physical affection, a line of inquiry he unsurprisingly has no answer to. An early shot of Wynne’s face viewed from beneath the surface of a local pond suggests that she’s a likely victim, but not in the way we might expect. At a time when relations between men and women require thorough analysis, I Start Counting! is about 50 years ahead of its time, and is essential viewing for fans of British cinema.

Extras on this BFI restoration include commentaries, contemporaneous films and features on the film’s music by Basil Kirchin plus a lockdown chat to writer Richard Harris, but the key one is a 20 minute interview with Agutter, which is a model of how these things can be more than puff pieces. Seemingly able to remember the 60’s as if they were yesterday, Agutter find something generous and positive to say about most of the cast and crew, and manages to evoke her own relationship to each of them with candour. From Logan’s Run to An American Werewolf in London, Agutter has been an iconic figure in cinema for decades, and it’s something of a tonic to see her speaking so well of this previously neglected film.

Thanks to the BFI for advanced access to this blu-ray, out now in the UK. Links below.