As a kid, I sat down one Saturday morning to view Jules Verne’s Rocket to the Moon, and was profoundly disappointed. Not only does Don Sharp’s sci-fi comedy not actually get anywhere near the moon, the rocket mentioned is only seen in the last six minutes and crashes on lift-off. At the time, I saw absolutely no excuse for calling your film Rocket to the Moon if either the moon or the rocket are not central plot elements; several decades later, a new blu-ray restoration offers a chance to see if more mature instincts might find something of value.

This isn’t really sci-fi, but belongs rather in the tradition of all-star comedies such as It’s A Mad Mad Mad Mad World, The Great Race and Monte Carlo or Bust. Set during the reign of Queen Victoria, the central figure is a real one, PT Barnum, not played here by Hugh Jackman but in the rather more rotund form of Burl Ives. Leaving America in disgrace, Barnum arrives in Great Britain to kick off a race to space, with a plan to hollow out a mountain to create a massive cannon to fire his projectile. Goldfinger Gert Frobe is the explosives expert, while Terry Thomas is Captain Sir Charles Washington-Smythe, who if you can’t guess from the name, is a complete bounder who has stolen most of the funds that Barnum’s team have carefully collected. A pilot is required, and when aeronauts Daliah Lavi and Troy Donahue crash their hot air balloon onto the proposed launch-pad, the name Gaylord Sullivan is mooted as a potential candidate for the first man into space. 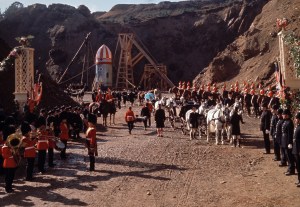 So no aliens, no spacecraft, no space, no action, and lots of committee meetings; is Jules Verne’s Rocket to the Moon a goer in any way? Two estimable minds make a good case on the blu-ray extras, with Matthew Sweet making a good job of explaining how producer Harry Alan Towers’ own career choices mirrored PT Barnum’s, and Kim Newman explains the context of the film in typically tremulous detail. Both recognise that period action specialist Sharp did a great job here, from the climactic penny-farthing chase to the way that Smyth’s car requires gas syphoned from lamp-posts; the period detail is rather charming, as is the cast, including Graham Stark, Hermione Gingold, Stratford Johns, Lionel Jeffries and Dennis Price, all of whom make an impression amongst the pre-Altman-esque sprawl of characters and events.

The film’s last note, a sour jab about The Cold War, probably doesn’t help, but Rocket to the Moon probably has never looked as good as it does now, primarily because it won’t be mistaken for sci-fi any more. As a compendium of British comedy talents, however, it’s packed to the gills with notables, and even if the pacing is slow, it’s something of a joy to see some great players in top form. This genre of anything goes, widescreen comedies, later morphed into Wacky Races and The Cannonball Run, but are really just variety shows based around the theme of movement, and should be enjoyed on their own simple merits. Jules Verne’s Rocket to the Moon may not take you to the moon, but it’s certainly an amusing diversion.

Jules Verne’s Rocket to the Moon is out now for the first time in the UK on blu-ray, DVD and digital.

Thanks to Lisa Richards PR and Studio Canal for access to this title.

And a very unrestored trailer…