Back in 1979, when North Sean Hijack was being filmed, American author Roderick Thorp was working on a similar project, a novel called Nothing Lasts Forever which would be filmed within a decade as Die Hard. The success of that film created a new genre, but North Sea Hijack feels very much cut from the same cloth; an Alistair MacLean-type thriller firmly based on a siege/hostage situation, with the terrorists actually robbers intent of swindling the authorities out of some loot. Based on a book by Jack Davies, named Esther, Ruth and Jennifer after the three rigs involved, Andrew V McLaglen’s thriller wasn’t much admired at the time, and there are glaring flaws in the film’s plotting, but there are also plenty of sweet moments to justify a cult following.

Straight off the bat, there’s a fun performance from Roger Moore here, at the peak of his Bond fame, and keen to ring the changes on his image; cat-fancier Rufus Excalibur ffolkes is a huge fan of needlepoint, and spends most of his film working on his latest creation. And he’s supposedly a master strategist, which takes a good while to come to the boil; seventy minutes in, ffolkes hasn’t actually done anything but ask his crew to synchronise their watches. Meanwhile Anthony Perkins embraces type as mercenary terrorist with a bloodlust Kramer, and James Mason just about keeps his dignity afloat as a concerned Admiral. Kramer plants explosive on three oil-rigs and sits back to wait for the Admiral to stump up 25 million squid, but Lloyds of London don’t fancy cashing them up and send for ffolkes, who they can quite literally pay with a box of kittens for his efforts. 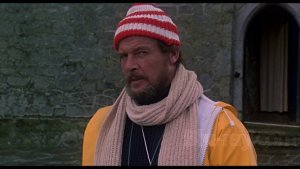 North Sea Hijack is amusing in the way it presumes that we’ll agree that ffolkes is a genius; on this evidence, he’s a complete idiot. Striding around in a stripey bobble-hat and Vermillion wetsuit, he requires to be rescued by the ship’s gamine cook (Lea Brodie) the moment he steps onto the rig. And his master-plan, as shared with the Admiral, involves offering terrorists a packet of cigarettes as a distraction then dropping the fags on the floor. This plan surely only works in a hostage situation is so convivial as to allow the sharing of cigarettes; it’s surprising ffolkes doesn’t have a salver of canapés at the ready as back-up.

Sure, you could remake this as a straight action vehicle, but some of the plot-points were ancient in 1979 and are positively mirth-inducing now. And there’s comedy with one of these new fangled female politicians for ffolkes to tangle with (the UK prime minister played by Faith Brook), something of a novelty in 1980 and unlikely to catch on. Still, North Sea Hijack is a good example of Elliott Kastner’s productions; effective, tense, star-driven and satisfying enough for a Friday night. Reuniting Moore with his Wild Geese director, North Sea Hijack doesn’t have quite the explosive qualities required, but as a precursor of Die Hard, it’s just about got most of the notes in almost the right order.