Not a lot of people know this, but The Black Windmill is the 30th Michael Caine film I’ve reviewed on this blog, and if you think you know all there is to know about Maurice Mickelwhite, then you’d bloody-well better think again. Caine is one of the most enduring films stars, filming The Great Escaper with Glenda Jackson at the time of writing this, and has been around since well before most of us were born. There are phases to his career, bursts of thrillers, comedy, horror, short hair, long hair, curly hair, fashionability, unfashionability, but he’s never less than watchable. The Black Windmill was seen as a rote thriller back in the day, but a truly rewarding watch for fans of Michael Caine, and director Don Siegel, fresh from his Dirty Harry success. It’s out on blu-ray for the first time in the UK, and easy to recommend.

Originally and unexitingly titled Drabble, based on a novel by Clive Egleton (Seven Days to a Killing), and produced by the Zanuck/Brown duo behind The Sting, The Black Windmill has the taut feel of an Alistair Maclean thriller, and that’s no bad thing. Caine plays Major John Tarrant, a British intelligence officer known for his lack of emotion, or certainly any visual indications of engagement. His son, still a child, is kidnapped by terrorists who seek to use Tarrant as their pawn to extort Tarrant’ superiors, notably Cedric Harper (Donald Pleasance) who just happens to have a half-million in uncut diamonds lying around. Tarrant has to dodge his own men, who fear that he’s staged the kidnapping for his own benefit, while at the same time keeping the real kidnappers in his sights, traveling to a rendezvous in Paris and then back for a final dramatic shootout at the Black Windmill itself in East Sussex…

There’s one brief moment when Caine winks at the audience that seems excisable here; otherwise, the star plays into his strengths with a great performance as a hardened professional not given to outwards shows of anything; he’s a John Wick prototype for sure. Harper remarks how ‘composed’ Tarrant is, but Tarrant responds ‘That’s what you pay me for.’ The personal nature of his mission is intense, but Tarrant always seems human and vulnerable behind his specs. There’s yet another terrific score by the great Roy Budd, John Vernon is always a great villain, there’s funny slams on Kilmarnock and Sean Connery, and Janet Suzman has a great, emotive bit as Tarrant’s wife. 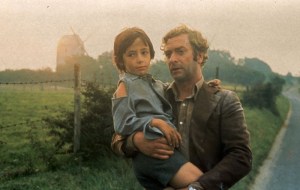 There’s an edge to Siegel’s work that belies his B movie reputation; by the 70’s, he was a biggest gun for hire on the block, and this handsome, quirky production, his only one in the UK, shows off his pro Hollywood skills. I saw The Black Windmill on a tv screening one Sunday night on BBC1 in the early 1980’s, and thought it had a kick like the vigorous shot-gun finale. Viewing it forty years later on blu-ray, the whole film looks and feels great; if you want to give yourself an old-school viewing treat this Easter, The Black Windmill is thoroughly recommended fare.

This neglected film has a great blu-ray treatment here, with a couple of choice interviews with remaining personnel. Joss Ackland reveals some of the actors’ on-set rivalries, of which there seem to have been many, and also recounts how he turned a pre-stardom Caine down for a production of Alfie at the Mermaid theatre. And cinematographer Ousama Rawi has a good twenty minutes or so to reflect in detail on working with Caine and Siegel, and seems to have a photographic memory for the detail of the production. Both add detail to a great package; as people in the know say, if Michael Caine is going to be in it, you KNOW it’ll be good.

Thanks to 101 Films for advanced access to this blu-ray title.