If the horror movie is one of the most dependable genres, in terms of audience interest, then the haunted-house movie is a traditional refinement of that idea; Stephen King writes about the idea of ‘the bad place’ as somewhere that absorbs the negative energy of previous terrors and manifests them on the unwary, and that’s made for classic films like The Haunting and The Shining. Chris Smith follows down the same route of having an-‘ing in the title, but he offers an intelligent, literate slant on things, making this that rarest of things, a classy, smart horror film.

It’s pre-WWII England, and a pre-credits sequence sets the tone with a mysterious death, and the dancing figure of spiritualist Harry Price (Sean Harris from the last two Mission Impossible films, here sporting a shock of red hair that would make George Costanza’s dad blush). The meaning isn’t immediately clear as we re-focus on Marianne (Jessica Brown Findlay, Downtown Abbey) who is married to a rather timid local man of the cloth, Linus (John Heffernan). Complete with their daughter Adelaide, the family move into an old manse, the Boreley rectory, and soon the familiar elements are in array; spooky dolls, children’s toys, mysterious hooded figures and more to come…

Perhaps we’ve been on this particular ghost train ride before, but rarely with such sustained tension; Smith is a genre veteran through memorable work like Triangle and Black Death, and while he’s got an eye for an unsettling image, The Banishing never slips into the set-piece shocker mould. Gore, even acts of violence are generally played down in favour of character and setting; John Lynch has a neat part as a clergyman who stands in opposition to Price’s superstitions, and this pays off in a final twist that will not be revealed here.

The Banishing doubles down to focus on Marianne’s POV, but always keeps a tight grip on reality as she sees it; the finale may not be the effects-catalogue so often offered, but fans of the granular slow-reveals of The Conjuring 1 and 2 will enjoy the vibe here. Smith has long been one of cinemas most understated film-makers, but The Banishing’s appearance on the popular Shudder horror channel from April 15th should ensure that everyone’s reputations are enhanced by this considered, wintry and effectively fearful slice of horror.

Thanks to Shudder and Vertigo for advance access to The Banishing, which will stream on the following digital platforms from the 26th March, courtesy of Vertigo Releasing: 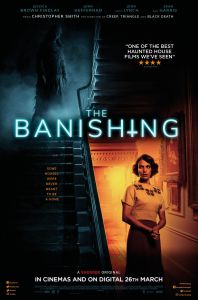