I’ve been in a routine of watching at least two films a day for as long as I can remember; it’s a habit that started young, and the first film I can consciously remember watching from beginning to end was The Italian Job during a 1970’s ITV screening. Sitting on my mother’s knee, the pre-school me saw it less as a heist movie as a film about three little cars, all Minis, red, white and blue and their wild adventure in Italy. Several decades later, The Italian Job drops onto Amazon Prime in the UK sweet as a nut, and still feels like the same fun PG film, highly entertaining, tight as a well-fitted rear-differential, a perrenial classic. 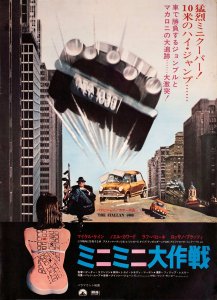 Peter Collinson’s film is one of Britain’s best-loved films, still screening on terrestrial tv on what remained of Christmas Day, 2020; the mystery is why US audiences didn’t take to this jovial caper. All the iconic elements are present and correct; a great movie requires a great star, and The Italian Job features peak-Michael Caine as Charlie Croker, breezing his way in and out of jail as he seeks to complete a planned bullion robbery in Turin. Getting finance from patriotic con Mr Bridger (Noel Coward) is the first obstacle, then building the team (somehow Benny Hill as Professor Peaches, the computer whizz), and finally executing the robbery; one telling detail is that the gang disguise themselves from the eyes of the police as English football supporters, a disguise that would instantly arouse the attentions of Interpol today.

The Italian Job has a big ramp to climb; there’s lots of hints about what the robbery is going to look like, but when it arrives, it’s a cinematic blast-off. With no CGI and little back protection, Charlie Croker’s gang offload the gold bars into three Minis, small and agile enough to drive through tunnels, through waterfalls, across rooftop race-tracks and literally fly in the air above the Turin traffic jams that Charlie has created. Writer Troy Kennedy Martin was a master of quality tv; for cinema, he pulled the stops out for an iconic chase sequence that’s still a marvel today. Forget your Fast and Furious, the car stunts here look real, dangerous, yet have a genial feel that just pops on-screen. It’s also worth pointing out that The Italian Job has one of cinemas great endings, one that both endorses and rebukes Charlie’s bravado, yet offers a cliff-hangers that suggests that nothing will ever stop Charlie Croker for long.

Carp if you want at the (marginal) gay stereotypes via Camp Freddy or some vestiges of 60’s chauvinism; a film has to reflect it’s time. But although The Italian Job has been embraced by some for British nationalist purposes, the film’s point is quite the opposite; Mr Bridger is a fierce royalist, but he’s also a criminal, and Charlie wants nothing from the establishment other than to forge an opportunity to better himself. It’s the self-preservation society, as the final song from the cool Quincy Jones soundtrack suggests, and nobody does it better than Charlie Croker. They may have set out with no more ambitions than to blow the bloody doors off, but The Italian Job’s crew made cinema history with this ebullient bullion-swiping romp. The link below is for the Amazon UK release, free for now.