There’s always a case to be made for a British B movie, particularly in the sci-fi genre. It’s admirable how films like Unearthly Stranger attempt to capture Avatar levels of inter-spacial intrigue with nothing more than a blackboard and a lab-coat. The great Freddie Francis manages to tap-dance his way through at least half-an hour of They Came from Beyond Space with nothing more to offer in terms of props than a piece of paper with a drawing of a circle that has the word ‘moon’ written on it. In a British film, that’s all you need; the rest is left to our imagination. 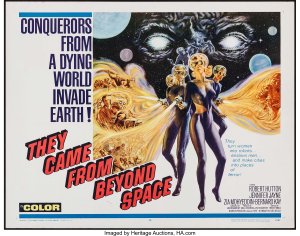 A dying race of aliens set up a base on the moon; these ‘moon-men’ send a deadly plague down to the earth. Authorities are left with large piles of corpses which have to be disposed of to avoid infection, and these bodies are secretly sent to the alien moon-base so that the devious beings have bodies to inhabit! Exciting, huh? Well, calm your jets, because this is a British film, and the story runs secondary to men in trilbys sitting at desks, visiting quaint petrol stations, drinking tea and generally hanging around. Robert Hutton plats Dr Curtis Temple, sent in by authorities to find out what’s going on after some meteorites fall to Cornwall in formation. All the ladies fancy Temple, and once he gets going, that’s no surprise; he’s a one man Rambo/James Bond, and after threating to ram his vintage car through the gates of the alien facility, he leads a one man mission to the moon which leads him to none-other than the Master of the Moon, played by Michael Gough and his colourfully dressed minions pictured above. 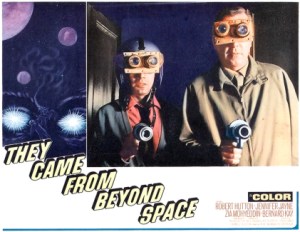 This madcap and rather charming movie is somehow based on a book called The Gods Must Hate Kansas, but the story has been re-located to the UK to ensure maximum drabness. The sets are left over from the Dr Who sequel Daleks Invasion Earth 2150 AD, the ray-guns look home-made and the wonderful character actor Zia Mohyeddin gets to wear a galvanised colander on his head in an effort to stop the moon-men from reading his mind. Allo Allo’s Bernard Kay also turns up as an alien as further incentive to ironists; this is a fun film with big ideas, and the PG certificate correctly suggests, little to offend unless you’re a moon-man. 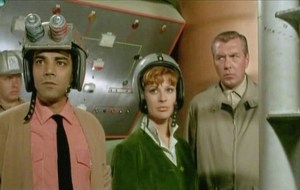 Churlishly described on release by Variety as ‘poor’, They Came from Beyond Space looks anything but on blu-ray, with lots of exterior shots that make 1966 Britain look as quaint as a Ladybird children’s book, and the space-ship interior is deliriously camp when it finally appears. Far better than the mangled print that sometimes turns up on TV, this is a lovely restoration of a very eccentric yet memorable sci-fi programmer, and a disc that’s a lot of fun to have around. Extras are less than plentiful, but there’s an original UK trailer and an affectionate audio commentary with film historian David Del Valle and regular Trailers from Hell contributor and filmmaker David DeCoteau

Thanks to Lisa Richards PR and Studio Canal  for access to this title.

THEY CAME FROM BEYOND SPACE  is available to buy on Blu-ray, DVD and Digital formats in the UK from today, 8th March 2021 via the link below.