There are few more things more invigorating than a hike through the 70’s back catalogue of Richard Burton, bad career choices made through a hail of vodka, cigarettes and the erroneous idea that Burton would live for twice the age he did, assumptions all detailed in the actor’s diaries. And yet there came a point where the coalminer’s son came bouncing back of the rails; his performance in Sidney Lumet’s Equus is spellbinding. Jack Gold’s The Medusa Touch followed a year later in a more commercial, supernatural vein, and while hardly a success, the film became an unlikely tv staple in the UK, viewed on ITV by millions on regular Sunday night screenings. Fondly remembered for it’s cheesy, wayward quality, there’s a surprisingly outré film buried within. 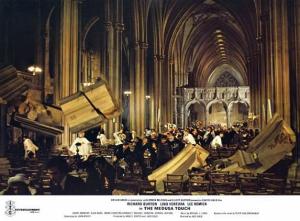 ‘When it comes to murder, there really is a common market,’ muses French copper Inspector Brunel (Lina Ventura) in a strange slight on the then-recent British-entry to the EEC; a political sideswipe that immediately clues the reader into the notion that The Medusa Touch isn’t standard horror fare. The writer, John Briley, was working on the Oscar-winning script for Gandhi, and was adapting a novel by Peter Van Greenaway, as high-faluting as the name suggests. The structure is tricky for a start; Morlar (Burton) is the man with an ability to cause disasters with his mind. A King Midas in reverse, an anti-Gandhi, Morlar is beaten into a comatose state by an unseen assailant in the opening scene. Imported inspector Brunel (Lino Ventura) is on the case, although his investigation seems to take months and involve everyone who knew Morlar telling him one anecdote at a time. These flashbacks within flashbacks are confusing, not least when physiatrist Lee Remick starts remembering interviews with Morlar during other interviews with Brunel. Derek Jacobi, seemingly cosplaying as Noel Edmonds, Alan Badel and a roster of Brit character actors all testify that Morlar is a monster, but Brunel still has to home in on who the assailant is, and what Morlar’s next move will be if he survives. 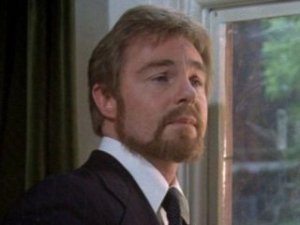 There’s an alarming, problematic scene early on; Morlar, seemingly a qualified lawyer, is in court defending a terrorist accused of attempting to blow up the Imperial War Museum. Morlar’s speech is fiercely anti-war, and he claims that the action was justified; quite an anti-authority, irresponsible sentiment for the protagonist of a big-budget, Lew Grade movie. Indeed, Morlar is quite a Howard Beale/Network uncomfortable truth-teller, even if we only see him in flashback; a misanthrope, driven made by his own bitter awareness of the unfairness of the world. Given the dangerous nature of Morlar’s rantings, well delivered by Burton, it’s surprising that The Medusa Touch deemed suitable for family audiences, rated A or PG. One haunting scene has Morlar express his dissent by causing a jumbo jet to smash into a city-centre skyscraper to show his displeasure; an easy-to-copy idea for political protest that hardly belongs in a mainstream, populist movie. 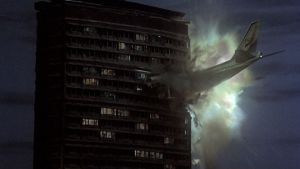 Causing space missions to fail, chucking his parents off a cliff via a runaway vintage car, attacking nuclear reactors, pulling down a cathedral on her head while the Queen is praying; there’s nothing old Morlar won’t do to demonstrate his status as a social pariah. By the end, campaigners like Phillip Stone and Harry Andrews are left dodging falling masonry as the apocalypse unfolds, but this really isn’t a horror movie like The Omen or The Exorcist, but a more philosophical and therefore more alarming beast. Morlar is a real monster, his powers are beyond his control, his eventual death is a relief. I note with further alarm that Amazon are somehow offering a ‘watch party’ feature with this purchase via the link below, which would indeed be quite a party if any budding Morlars out there want to join me celebrating this nightmarishly weird film….