Just to clear up any confusion; this is not the 2020 Best Picture winner at the Oscars, but a dubious multi-toothed alien thriller made in 3D and featuring Demi Moore. Few will make the mistake of renting one instead of the other; each has their own merits, but Charles Band’s 1982 film probably has the edge for ironists due to the novelty factor. Filmed in 3D, Parasite is an Alien knock-off on an obviously low budget, but there’s a few grace notes that make this palatable to genre fans, not least Moore’s breakout performance as a lemon farmer.

Moore rates this as her worst film, which, if you’ve seen Blame It On Rio, Nothing But Trouble or Charlie’s Angels: Full Throttle, is quite a boast, but she’s probably right, even if Parasite isn’t that bad. It’s the story of a scientist named Paul Dean (playwright Robert Glaudini paying his rent) who is hired to create an Alien –style killing machine, but accidentally gets infected with the parasite in question. Dean escapes from the government agency that employs him, also known as the Merchants, but takes with him a more developed Parasite in a metal canister. That creature is inadvertently freed when Dean gets assaulted by a random street-gang who look like they’ve walked out of a Whitesnake video, and Dean battles to recapture it before the Merchants’ dogged bounty hunter catches up with him. 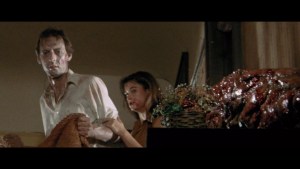 Although set in the future (if you can imagine, 1992!), Parasite largely takes place in a desert garage, boarding house and a few exteriors; it looks very cheap, but then again, what should the future look like if people are scattered to desert communities? In a world that makes Nomadland look like Vegas, it makes things stranger that Vivian Blaine, so memorable as the spirited Miss Adelaide in Guys and Dolls, turns up here as Miss Daley, an aging actress who the parasite uses as a host before bursting out of her noggin like a tomato in the microwave. In a film devoted to creating Alien-style gross-out moments in 3D, Blaine’s exit is probably the high/low point, although blood flowing in our faces through a metal tube that another character is impaled on takes some beating.

Band went on to create dozens of horror movies, but Parasite was arguably the success that his career was based on; while there are dull patches, Glaudini, Moore and Blaine are better than a concept like this deserves, and the 3D effects still look cool even in 2D. It’s a horror film with a few novel ideas, some nasty gore, and a few dashes of humour; Dean isn’t just an expect on parasites, he literally wrote the book on them. It’s called The Pathology of Parasites and he carries it around with him for most of the movie. Needless to say, it comes in handy as a means of understanding the strange world depicted here.