An obscure, largely unreleased Peter Sellers film that I only found out about while researching another obscure, unfinished Peter Sellers film, (Ghosts in the Noonday Sun), A Day at the Beach is one of these unheralded films that make delving into obscurity worthwhile. Based on a book by Dutch author Heere Heeresma, this feels like an early film by Paul Verhoeven, but actually was directed by Simon Hesera, not a name that means much today. There’s a few reasons why this film generally rests in darkness, but it’s worth shining a light on the positives first.

In a dour Netherland resort, Mark Burns plays Bernie, a raging alcoholic who pinballs between low-lifes and marks; he’s a con-man of a shambolic kind, usually with no motive other than to steal a drink, or the price of one, from his victims. Bernie takes a child he may or may not be the father of, a little girl called Winnie, for a day at the beach, but it’s cold, pouring with rain, and he’s more interested in finding opportunities to drown his sorrows. Played by Beatie Edney (later to go on to star in Highlander), Winnie is a cheerful soul despite a disability; her leg is in a brace, but she is determined to have a good time, even if her father/uncle’s attentions are fleeting. 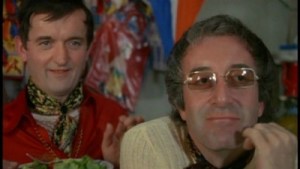 Bernie and Winnie meets a number of strange characters on their travels, including Maurice Roeves as a typically angry Scottish poet, Jack MacGowran as an irritable deckchair attendant, and Graham Stark and Peter Sellers as a gay couple, two off-message, off-licence proprietors. A Day at the Beach was photographed by Gilbert Taylor, who went on to bring a similarly pallid light to Richard Donner’s The Omen, and the sense of decay and dread are palpable. This isn’t really a story film, more an existential scream, taking a lead from Albert Camus and his novel The Outsider, and predates Barfly, Leaving Las Vegas and other miserablist epics.

An uncommercial proposition at any time, A Day at The Beach was intended as a project for Roman Polanski, who adapted the book, but withdrew when his wife was murdered. That in itself might have been enough to KO any chances of acclaim, but the pervasive bleakness and troubling sub-texts of a child in jeopardy made sure that A Day At the Beach was genuinely lost to cinema history. And yet this is an effective film that hits its target of drunken machismo; it’s a bitter, aggressive film that mirrors the fecklessness of the main character, before leading him and us to the most downbeat of endings. A must-see for cinema historians, this film seems to be racking up a cult audience on line, and is worth alerting literature and film fans generally to its previously unknown existence.