Not to be confused with last week’s critical darling What A Whopper!, despite the presence of that same films dynamic duo Sid James and Adam Faith, What a Carve Up! is a very British film is a curious pedigree. While it’s an unassuming dolts-in-a-haunted house programmer from 1963, What A Carve Up! has become a genuine cult item against all odds. Regularly shown on the Talking Pictures channel, Pat Jackson’s film was the subject of a Jonathan Coe novel also called What A Carve Up! which was about a man obsessed with viewing the film What a Carve Up!, and also as a play of the same title. That play of the novel inspired by the film first premiered in 2020, which was also called What A Carve Up!, and starred Stephen Fry. 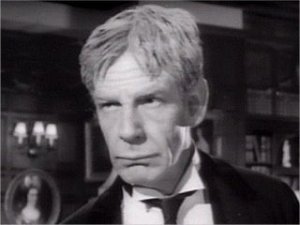 If you’re a fan of Tim Burton, John Carpenter or the Bond films, there’s strong links here; Michael Gough went on to butler for Michael Keaton’s Batman, Donald Pleasence gets his Sam Loomis on well before Halloween, and Shirley Eaton warms up for Goldfinger; it’s notable not only as early work for these stars, but that they’re playing the kind of characters that they stuck with for all their careers. Pleasance plays a creepy lawyer who summers up our protagonists (Sid James and Kenneth Connor) to a stately home where a will is about to be read; we’re talking about eyes moving behind paintings-type whodunnit? shenanigans, with Gough’s butler hanging around in the shadows. Dennis Price is amongst the posho family keen to gip the boys out of their potential inheritance, but with a mad killer on the loose, finance is the least of their worries.

Saddled with a dull title in the States (No Place Like Homicide), What A Carve Up! hasn’t made much impression abroad, but it’s a sleeper success that nails down a few truths about the class system. There’s no actual horror here, despite being adapted from a play called The Ghoul, but there is cult appeal in a story which aims to lay bare the grasping nature of UK life in comical fashion. And as a snapshot of some break-out actors just on the cusp of international stardom, it’s quite a bit of fun for cineastes. The 2008 DVD is a snip at just £73.