Every day, imaginary and non-existent readers alike ask me when I’ll be publishing a review of 1961 British comedy What A Whopper! That day has now finally come, as I’ve been able to refresh my memory by watching this endearingly drab film again. There’s a number of points of interest here, not least the authorship of Terry Nation, still celebrated for his writing for Dr Who and his creation of the ultimate fictional nemesis, the Daleks. Anyone seeking insight into Terry Nation’s celebrated sci-fi world should steer well clear of What A Whopper! because this is very much a mundane slice of business, despite the vague fantasy theme that director Gilbert Gunn resolutely refuses to explore.

This is the story of the Loch Ness Monster, Nessie as she’s better known, and the constant, on-going search for evidence of her existence that’s been going on for centuries. The financial gain is what unites the characters here, from Adam Faith’s wide-boy Tony who heads north with a loudspeaker of primordial moaning, to Sid James as Harry, a barman who is more pre-occupied with poaching and selling salmon under the noses of a local copper (Terry Scott). Indeed, the monster itself doesn’t turn up until the closing scene; Gunn and Nation are more interested in various bedroom window shenanigans as villagers and interlopers run into various tense scenarios. 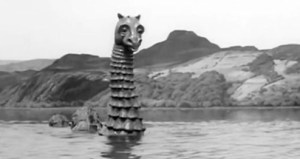 There’s a wealth of vintage talent here, from Wilfred Brambell, Charles Hawtrey, Molly Weir, Lance Percival and Clive Dunn, plus an extended cameo from Spike Milligan, who had a friendship with Nation which led directly to the infamous Pakistani Dalek sketch. Veteran broadcaster Fyfe Robertson plays himself in a cameo, and it’s revealing that the Scots are portrayed as being in fear and awe of the monster; several locals speak of the intense and foreboding dread that precede sightings of Nessie.

Of course, most locals know that Nessie sightings are closely linked to the inter-dimensional portal unwisely opened by Alistair Crowley during his occupancy of Boleskin house on the loch’s banks. Such portals is not something to be taken lightly, if only for the practical reason that it’s always harder to close these things than open them, and sightings of prehistoric monsters are likely to be connected to such shenanigans. What A Whopper! doesn’t go there, or indeed anywhere in particular, but offers pubs, ancient gags and very restrained British humour. Wrongly listed as both a Comedy Classic and Erotica online, this is neither, but a curious aperitif for those seeking undemanding film-making. And the monster is pretty cool when it finally arrives, although it doesn’t look much like the real Nessie, still Scotland’s best kept secret to this day.

What A Whopper is a competatively priced £49.99 right now on DVD from Amazon, or you can get a taster from the link below.