Guns have always been part of the identity of American life; in 2021, things have passed beyond parody to tragedy, with representatives elected on promises to bring weapons into the political workplace and endorsing the execution of their rivals. In movies, there’s nothing wrong with shooting as long as the right people get shot, as Dirty Harry once said, and Dirty Harry IV: Code of Silence was the original title for this script when developed in the 70’s. Having just seen his vigilante cop character paired with a woman (Tyne Daly) in The Enforcer, Clint Eastwood obviously thought that the robot partner featured here was a step too far. The script was retooled for a manlier type, and they don’t get any manlier than Chuck Norris, a man so manly than Covid-19 seeks inoculation against him.

Norris has been on the rise since his friendships with Bruce Lee and Steve McQueen propelled him to leading man status with outdoorsy romps like Lone Wolf McQuade. Signing to the Cannon imprint promised to narrowcast his appeal to fans only, but Code of Silence is a big studio film for Orion and tamps down some of the incredulity that dogged Norris’ work for Cannon. Ed-209 style robot partners aside, Norris broke out to mainstream audiences with this tough, cop-corruption thriller directed by Andrew Davies. The director went on to create action classic The Fugitive, and demonstrates the same fierce grasp of action and location here. Norris plays Eddie Cusack, a Man With No Backstory, presumably because the role was originally written for the well-established Harry Callahan. With no family, friends or domestic home-life to speak of, Cusack is dedicated to tracking down bad guys; crooked cop Craigie (Ralph Foody) is given to framing black kids for his own fatal mistakes, and Luis Comancho (Henry Silva) is opening up a gang-war on the streets of Chicago. It’s a bad world, but only one man can make the difference…

‘I hear they call you stainless steel on the street,’ enquires a passer by, and Norris lives up to that description, delivering the action in terms of two decent hand-to-hand combat scenes, a spark-striking underground car chase, and a dramatic chase/kidnapping scene that ends up with Chuck fighting on top of Chicago’s L train as it speeds though the city. Cleaned up and recalibrated for Norris, Code of Silence is a decidedly urban cop-fantasy, sticking more firmly to reality than the last two Dirty Harry movies, and bringing in a healthy x3 multiple at the box office as a hard-earned reward. Oh, and Chuck’s car’s is pretty hot too…. 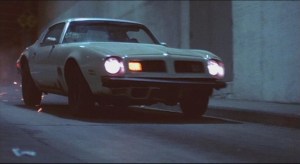 Like Eastwood’s Magnum Force, Code of Silence is a good cop movie about a good cop that sets a maverick amongst lawless lawmakers; we can see exactly how centred our hero is because of the rampant corruption around him. Norris gives his career-best performance here, and looks great even in neckerchiefs and a two-tone baseball jacket; his piece de resistance is a boots, jeans and woolly jumper/leather jacket combo which is exactly what I would wear every day if I could pick my own clothes. With the lines between good and bad being deliberately blurred right now, it’s a pleasure to relax back into nostalgia for yesterday, and when you seek such intellectual solace, you literally cannot even begin to think about beating Chuck Norris. He’ll whip your ass every time.