My sudden appreciation for the work of playwright Peter Nichols, via A Day in the Death of Joe Egg and The National Health, runs somewhat around with this uber-gay military comedy that is consistently interesting, but falls afoul of the stage to screen route. Michael Blakemore’s film has a decent production design to reflect Malaysia in the late 1940’s, and skips much of the potential for farce in favour of bursts of stark tragedy, but the mixture doesn’t quite settle, despite the presence of crowd-pleaser and main attraction John Cleese.

It’s hard to nail how much of a comic Messiah Cleese was; an alumni of the 1948 Show and David Frost, Cleese also walked out of Monty Python at the peak of their success to create classic sitcom Fawlty Towers. The nation, if not the world yearned to see more of Cleese in meltdown, officialdom gone mad, the silly walks. And yet somehow, despite Privates on Parade containing all of the above, audiences didn’t take to it. Perhaps nostalgia for armed forces entertainment was in short supply in 1983, although the success of tv comedy It Ain’t Half Hot Mum suggests otherwise. Still, this is worth a look for Cleese fans, and also for those interested in Nichols’ work, this being a popular play when it first debuted in 1977.

Cleese plays Major Giles Flack, who inherits a flamboyant concert party largely built around the talents of Captain Terri Dennis (Dennis Quilley), an aging character who models his on-stage persona on Carmen Miranda, Marlene Dietrich and others. Flack is a straight-shooter, Dennis is not, and the stage is set for a battle of wills between the two men, with a deadly background of a guerrilla war behind them. Nichols always cheerfully exploited the gold-mine of his own experiences, as a hospital patient or as a father, but Privates on Parade doesn’t find too many nuggets of shared truth; a late-in-the-day massacre is a little heavy handed in attempting to imbue pathos. And once you’ve seen one drag act, you’ve seen them all; despite the guiding hand of George Harrison and Handmade films, a number of the musical numbers would be worth excising. 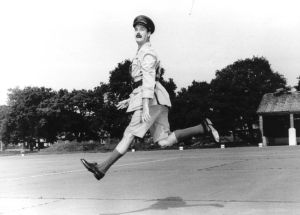 A final parade-ground sequence sees Cleese cut loose on the clowning, testing out silly walks on a runway as if he’s doing donuts in a sports car, but otherwise, Privates on Parade doesn’t provide enough opportunity for scope; the set-ups are there, but Blakemore seems more intent on tears rather than laughter. That said, this is a faithful record of a play which was something of a time-capsule, and has some merit as a historical document; Nichols brings his memories of service to life, and Passenger 57/Warlock II star Bruce Payne provides strong support. I’m still hoping to whip up public interest in my actual true story about how I helped carry Bruce Payne’s ironing board across a zebra crossing in Maida Vale when he was moving house some years ago, and encourage readers to DEMAND to share this incredible insight into showbiz by requesting to hear it.