Also known as A Winter’s Tale, aka That Awful All-Star Magic Horse Movie, this 2014 shambles must be verging on cult status by now; widely stream-able in 2020, it’s a lush, literary, woolly-headed confection that truly has to be seen to be believed. Written and directed by Akiva Goldsman, the ice-kicking creative force held responsible for universally agreed cultural low-point Batman and Robin, it’s an adaptation of Mark Helprin’s fantasy novel, and one that notably fails to demonstrate how the concept of magical realism might work in modern movies. While truly terrible in every possible way, it gets a three star review for sheer comedy value; everyone is playing out of position here, and there’s plenty of WTF moments to keep the casual viewer in stitches. 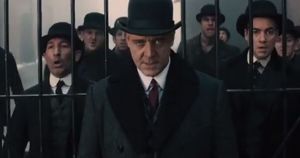 The setting is New York, and an orphaned child grows up to be Peter Lake (Colin Farrell), a cat burglar with a ridiculous Shed Seven hairstyle, a penchant for ladies and a magic flying horse (called Horse) which he uses to escape from bowler-hatted local thug Pearly Soames (Russell Crowe, not even trying). Lake falls for Beverly Penn (Jessica Brown Findlay) a woman dying of consumption who, for medical reasons that are not clear, sleeps in a gazebo on the freezing-cold roof of her posho family residence during the dead of winter. Her publisher father Isaac (William Hurt) takes a shine to Peter Lake because of his deft touch with furnaces, but Soames threatens Beverly’s life with a magic potion that he picks up from demonic overlord Lucifer (Will Smith with an earring, I kid you not). A hundred years of torment later, Jennifer Connolly has a dying child who runs smack into Colin Farrell’s crotch while playing in a snowy Central Park, and they take her to see Eva Marie Saint, who…. 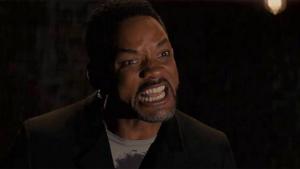 That plot summary quickly collapses into gobbledygook, but accurately reflects the confused and confusing nature of this expensive looking but extremely stupid movie. I’m a fan of Crowe, but he’s simply terrible here, muttering his lines in an Irish accent that sounds like the world’s drunkest leprechaun murmuring into his pint. Only Hurt and Saint rise above the mayhem to actually score any points on the board, and it’s remarkable to see such an assembly of talents all at sea. Spoiler alert! Pearly’s knuckle-headed endgame involves parking a dozen vans full of henchmen on extremely thin ice before Lake’s magic horse melts it. This must be the nadir of bad-guy thinking for all time; no super-villain has ever managed such incompetence.

And yet…this film reeks of ambition, and the text it’s based on is, or at least was until this turkey hit the screen, well regarded. The NYC backgrounds are lovely to look at, and the faux poetry of the dialogue has the appeal of the cheapest of cheap sentiment. As a serious film, this is a non-starter, but as a record of how a massive budget can be wasted, A New York Winter’s Tale is a free-way pile-up well worth rubber-necking. Tempted? Here’s a sample of the kind of florid dialogue you’ll hear, read by Will Smith in a career low even for Will Smith.

‘Now? You have no idea what “now” is. Now, I was flying. Now, I breathed fire and I ate them as they fled. Now, I whipped my tail and the winds trembled. Now, I am hidden in this pale shade of flesh and bone. Now, I am witness to man’s eternal salvation, now I am witness to his demise. Do NOT speak to me of time, demon! It’s simplest ebbs and turns elude your meagre understanding! Find another way, Now!’