Some random viewing that might strike a chord with Brit-o-philes or comedy specialists; coming off the back of Flash Gordon, Mike Hodges unwisely got involved in this pretty awful vehicle for Mel Smith and Griff Rhys Jones, then household names in the UK for sketch show Not the Nine O Clock News. That programme was originally conceived as a break-out show-case for Rowan Atkinson, while also making a star of Pamela Stevenson, but owed much of it’s success to Smith and Jones, who successfully spun off their own series. For reasons hard to imagine, the duo don’t feature together in this film, handicapping their comic timing and hobbling this misbegotten venture that flopped hard on release. 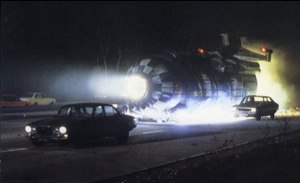 Smith plays Bernard, an alien abandoned by his three alien colleagues when they crash land on earth; the film starts with an impressive motorway/spaceship crash that looked great in the film’s tv ads. Bernard is the smartest of the bunch, but finds his attempts to address rubbish bins as people to be less than fruitful. The intruders, played by Jimmy Nail, Paul Bown and Joanne Pearce, just look like normal people, but they are proper idiots, and soon become 1985’s version of a viral sensation; Jones plays a journalist for a television channel called UKTV who becomes a PR agent for the illegal aliens. 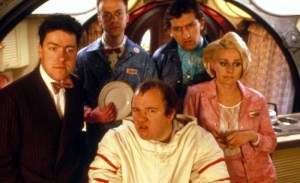 There’s a scattering of decent parody gags here; some joy is taken for puncturing the Spielberg-ian sense of awe that suffused so many 80’s films, and the best joke features the son et lumiere of Close Encounters segway-ing into a mighty Wurlitzer performance. But there’s literally nowhere for this comic idea to go; it just ends up as a series of shouted arguments in hotel rooms, despite the support efforts of tv stalwarts from both sides of the pond, Dinsdale Landen representing the UK, Hill Street Blues’ James B Sikking from the US.

Fans of the comic duo Smith and Jones can’t have been satisfied by watching Landen and Sikking when they’d paid to see their favourites; Not Again, a documentary about the making of the original Not The Nine O’Clock News show, gives some insight into how this misbegotten film got made. Hired as straight-men, Smith and Jones offered a low-key, blokey brand of humor compared to Atkinson, a performer ideally cast as a strange-voiced alien. All four became huge UK stars, and Smith and Jones didn’t feel connected to the juggernaut they were part of, and that disaffection is clear within this film, depicting show-business as a transitory brand of idiocy. In a sense, this pre-dates the trend of idiots as heroes, from the Tiger King to the Kardashians, making Morons From Outer Space a slightly more perceptive film than audiences could appreciate at the time.