Let’s talk about race. Eagle-eyed readers will have spotted that the above picture is not the face of Fu Manchu, but Max von Sydow playing Ming the Merciless in 1980’s kid-friendly camp-fest Flash Gordon. Last week, the BBFC re-classified the re-release of the film on DVD to put it out of the reach of children; the BBFC’s Matt Tindall explains ‘Ming the Merciless is coded as an East Asian character due to his hair and make-up, but he’s played by a Swedish actor in the film, he’s played by Max Von Sydow, which I don’t think is something that would happen if this were a modern production, and is something that we’re also aware that viewers may find dubious if not outright offensive…’ Presumably, the BBFC will be slapping the same prohibitive certificate on Star Wars, where the character Watto, a pawn broker with a horrific, hooked nose and seemingly fashioned after the most anti-semitic cartoons of Jews to come out of Nazi Germany, deserves the same treatment. The BBFC seem to want to make judgements for us rather than educate the viewer to make their own decisions about coding, and about what stereotypes are and why they exist. Amazon, Netflix and other streaming services are happy to take our money to get content for us, but don’t seem to have any thoughts about how to provide context or advice about what they sell, and the result is big-tech irresponsibility. 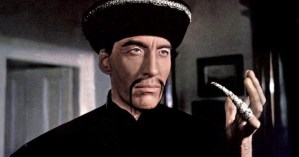 So here’s The Face of Fu Manchu,  a 1965 British film that takes the characters of Sax Rohmer’s books and updates them to a James Bond aesthetic; a big hit at the time with audiences worldwide that spawned four sequels. The title doesn’t mention that Fu Manchu is a doctor; Fu Manchu is also a criminal mastermind, and Nayland Smith (Nigel Green) of Scotland Yard is on his trail. Smith is the kind of man born to stand in front of fireplaces and smoke a pipe, and after an hour of gentle interrogation, things jump up a notch with a rare period car chase that ends with Fu Manchu’s many henchmen dropping bombs from their plane, pretty cool for 1912 and not bad at all for 1965. Smith works out that Fu Manchu’s operation is blighted by nepotism, and traces his daughter (Tsai Chin) back to Fu Manchu’s underground cavern, where he plans to release a deadly chemical weapon on the world.

Let’s make no bones; there is a strong sub-text of racism in Don Sharp’s thriller, and it’s specifically build around the idea of portraying the Chinese race as being callous enough to launch a germ warfare chemical attack unprovoked on the rest of the world. Fu Manchu targets the village of Fleetwick, where he kills thousands of men, women, children and even dogs with his weaponised poison. These scenes are chilling, and used as reason enough for us to cheer Smith to make an effective, vicious strike back against the ‘Orientals’ responsible. It’s racist in the same way as referring to ‘the China virus’, picking up on decades of distrust and disinformation about other races, attitudes that seem to still be with us today. This film is revealing and culturally important because of what it reveals about past attitudes, but it needs to be viewed in the context of the time.

Four sequels followed featuring the same character; a rival to Bond, but inverted so that the villain is the draw, or at least that’s how my mum explained this film to me when it was screening for ten million UK viewers as a Wednesday night movie on BBC1 in 1979. Via the BBFC’s new understanding that actors must come from the same race as the characters they play, Lee’s performance as Fu can only be racist; you wouldn’t see Liam Neeson as Ra’s al Ghul in Chris Nolan’s Batman Begins, or Tilda Swinton as the Ancient One in Marvel’s Dr Strange, would you? Oh, you would, and you do, and the BBFC aren’t clamouring for these immensely popular films to be publically disgraced in the way that Flash Gordon has been. Big companies and corporations have shown a willingness to offset their negative effects by putting something of value back into the communities they disrupt; it’s time that the big streamers showed some interest in providing some meaningful context to all of the films they’re so cheerfully selling.  We need context and education, not censorship, or else it’ll take more than Nayland Smith and Scotland Yard to save the world from what gets unleashed.