‘I bet you say that to all the boys,’ says Michael Caine in typically irreverent fashion in Mike Hodge’s cult movie Pulp, a detective story which makes full use of sunny Maltese locations. ‘I was still trying when we got to the temple of Zonk’ muses Caine’s character, a writer named Mikey King. The temple is a real place, but the story is fiction, pulp fiction; Hodges had secured a sizable hit working with Caine on Get Carter, and fancied a more literate variation on Caine’s familiar, loquacious on-screen personality.

Regular readers will know that I’ve been slowly putting together a thesis connecting the length of Michael Caine’s hair to the quality of his performance; for the record, Caine has a quite ridiculous barnet here, a hair-helmet matched with tinted oversized glasses and a white suit. King has been hired to ghost-write the autobiography of a retired hood, an occupational hazard that King hopes to turn around to his advantage. His first contact is played by perennial gangster Al Lettieri, but eventually his true adversary appears in the form of Preston (Mickey Rooney, good here and not in his Breakfast at Tiffany’s overplay mode). When Preston is killed at his own birthday party, King sets about trying to figure out who is responsible; no easy task with a gallery of criminals and low-life politicos around him. 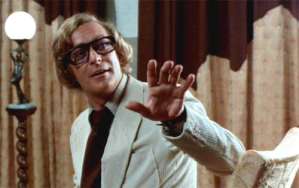 Hodges is at his best when messing with the quirky edges of a story; he’s aided here by editor John Glen, one of the key men in the Bond franchise. Working with very funny voice-over written by Hodges and spoken with iconic bravado by Caine, Pulp is elevated to classic status by pumping fresh blood into detective-movie clichés; fresh from working with The Beatles, George Martin provides a suitably exotic score, with some Beatles in-jokes scattered around.

Pulp flopped at the time of release, but became something of a BBC tv staple in a horrid pan-and-scan release. Yes, this is where Jarvis Cocker got the name of his band, and it’s easy to see why; the film is dripping with personality and quotable lines. “I got out of bed…that was my first mistake’ drones Caine, while a sexual encounter provokes such raptures as “I had visions of refuelling in space’. While neither a great detective story nor a violent thriller, Pulp is a thinking person’s film, with classic Caine and a unique selling point; how do you react when the real world is stranger than the fictional?