There’s no actual bears, but quite a lot of silver in this 1978 caper comedy, which seems to have become neglected over the decades, but actually offers quite a novel scenario. This is a comedy about banking, and about Swiss banks specifically; it’s a movie cliché that banking in Switzerland is the perfect front for all kinds of financial shenanigans and malarkey, from The Wolf of Wall Street to Assassins, so it makes sense to double-down on that and create an entire film about how criminals might seek to exploit financial loopholes.

We need a proper mastermind to explain the rules; step forward Doc Fletcher, played with short hair and clipped manner by Michael Caine. He’s pulled in by Martin Balsam to buy a tiny Swiss bank as a front for the mis-dealings of a mysterious consortium. At a cost of $3 million, Fletcher finds he’s been sold a lemon, with only $900 in the safe. But Fletcher uses this as a way into a bigger game, with a secret silver mine looking for a loan, he comes up with a wheeze by which he makes the loan, then forecloses on the deal, making the mine into an asset of his bank. Louis Jordan does his suave bit as his boss, and he’s not the only Bond villain here; Charles Gray also turns up, and there’s support from stalwarts David Warner, Joss Ackland and even Jay Leno, looking like Weird Al and sporting an early John McEnroe hairdo. 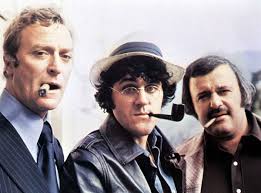 This might sound dry, but Silver Bears doesn’t go for sex, pratfalls or chases; Ivan Passer’s film keeps its dignity, even if it lacks a single memorable heist sequence, and the jiggery-pokery depicted feels like a forerunner for David O Russell’s American Hustle. Cybil Shepherd hams it up as a romantic interest, and is good value, even if her ditzy blonde act would be better suited to a broader film. Any film with scenes set in London Metal Exchange, yet another good band name, deserves points for educating the audience, and Silver Bears is ahead of its time by showing how international banking rules can be manipulated without repercussions by the unscrupulous.

Silver Bears is a breezy little film, with big names, smart Swiss locations, and a complex story that keeps you guessing. It may have been out of synch with 1978 cinema, no aliens, fast cars, disco lights or such faddish diversions, but it’s level head makes it a quietly enjoyable diversion for adults with a bit of patience.

Thanks to Studio Canal for access to this title.