Expect the unexpected would be a good maxim for the best of the BBC’s fabled Play for Today offerings; this effort, from playwright John Bowen and director John Glenister, is a twisty-turny story that ends in quite a different idiom from the opening. It’s always a challenge to review a narrative which genuinely takes the viewer by surprise, but that’s what a great one-off drama can do. A Photograph’s sleight of hand leads to more than a couple of refreshing, revitalising moments, reaching the kind of places that other dramas can only dream of.

BBC tv drama loved to see a middle-aged man in crisis, and John Stride made a career of troubled middle-management figures, this particular one goes by the name Michael Otway. He’s matched here by Stephanie Turner, best known for playing the first female incarnation of top cop Juliet Bravo, and a master of the baleful stare as his frowsy wife Gillian. The couple are in bed one morning when a photograph arrives in the post, of two girls sitting outside a caravan. Michael dismisses it, but Gillian fixates on the picture, even blowing it up and hanging it above their bed. In order to prove her wrong, Michael embarks on a search of the area for the actual caravan, but is there some truth in her accusation, or does her obsession reflect on her own personal mental health issues? 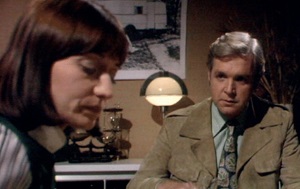 What’s wrong with this picture? A Photograph starts with a lengthy set of Pinter-esque domestic arguments; ‘I married you because you were pregnant, and then you lost the child!’ Michael bellows at point blank range, and we’re not even ten minutes in. But then the mood slips; could Gillian have sent the photograph herself to uncover her husband’s secrets? And are these actually two girls in the picture? Questions pile up, and a brief, throwaway scene of an old woman and a young man muttering in a caravan begins to assume a different meaning; there’s a sadistic game going on that’s not revealed until the final, breathless seconds of the conclusion.

This is a great little British drama with an utterly chilling conclusion that you simply cannot imagine from the start. There’s a dash of on-the-nose pretention through Michael’s job, broadcasting his thoughts on BBC radio about HG Wells’ The Time Machine and philosophising about the Morlocks who prey on the unwary. But there’s also deft word-play, like Michael mentioning that his ex-girlfriend was ‘in sewage’; with a high re-watch value, this is a great place to start if you want to persuade a friend that these old, dated but super-original plays can still outsmart most of today’s televisual feasts.

Thanks to the BFI for advance access to these titles.