Returning like a bad dream from the past, David Cronenberg’s adaptation of JG Ballard’s novel was headline news when it arrived back in 1996; it literally made the front pages for days on end in the UK tabloid world, with many ‘ban this sick filth’ editorials. Nearly 25 years later, this 4k cinema reissue provides a chance to look back on a film that’s still shocking even by today’s standards; we worry less about whether films will corrupt us these days, and it’s easier to appreciate Crash on its considerable merits.

Cronenberg’s icy brand of body horror made him an ideal fit for Ballard’s chrome and steel sci-fi intellectualism; Crash takes a cold, hard look at those who get off on the nature of machines. James Spader plays film producer James Ballard, who enjoys a modern marriage with Catherine (Deborah Kara Unger). Ballard finds himself in a headlong car crash which kills the husband of Helen Remington (Holly Hunter), who responds to her sudden bereavement by pleasuring herself in the passenger seat before the wheels have stopped spinning. She invites Ballard to enjoy a certain brand of auto-eroticism; they make love in cars, in airport garages. But things jump up a notch when she introduces Ballard to Vaughn (Elias Koteas), who entertains audiences of similarly inclined souls who enjoy his re-enactments of famous car crashes, from James Dean to Jayne Mansfield. The three get involved, but it’s only a matter of time before things take an even darker turn that the pitch-black relationships described above.

Crash isn’t for your maiden aunt, to be sure, unless she’s turned on by decapitations and bloody bumpers. But it’s also a film that’s fairly fearless about depicting crossed-wires in human nature; while many films promise outré behaviour, Crash certainly delivers, and the endless parade of out-there sexual acts does become exhausting (no pun intended). It’s firmly on message with the two key creatives and their outlook; it feels right that Vaughn’s gathering is raided, not by the police, but by the Department of Transport. Cronenberg’s uniquely Canadian flavour is deliberately off-kilter, and the precise yet non-specific nature of his storytelling is ideally suited to Ballard’s casual nihilism.

This is a film that connects sexual excitement with car crashes, and can only be recommended with the strongest of trigger warnings; issues of good and bad taste don’t apply to a narrative in which restrictive steel braces and scars are seen as desirable by the characters. And yet the movie is not carried along with their emotions; it observes the kink coldly, dispassionately, and allows the audience to decide. The picture below, presumably a publicity shot, is probably as unrepresentative of the film’s actual content as possible; it looks like a Friends reboot, or a brat pack soap, rather than the trawl through the human psyche that Crash is. 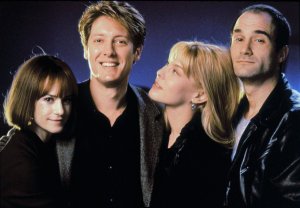 Crash isn’t for everyone, and in fact, maybe it’s not for anyone; it burrows into one of the darkest areas of human behaviour and makes a virtue of horrific detail. And yet the final narrative twists are surprisingly conventional; part of Cronenberg’s ability is the way he takes out-there concepts and fashions left of mainstream entertainment. As the central triangle, Spader, Hunter and Koteas all convince; Crash would be easier to ignore if it wasn’t so well made.

Thanks to Arrow Films for eary access to this title. Blu-ray from Nov 30th 2020.