In the lively exchange of intellectual ideas that was the comments section for last week’s cinematic catastrophe The Swarm, I mentioned Oliver Stone’s The Hand as one of a number of Michael Caine clunkers. It certainly seemed that way to me when I saw it on tv in the early 80’s, but a nagging doubt sent me back for a second look. While a flop back in the day, the prominence of Stone as a writer/director since has suggested there might be something worth exhuming, and so it proved.

Stone adapts an obscure novel here, The Lizard’s Tail by Marc Brandell, but the story is familiar; a gifted artist named Jon Lansdale (Caine), a comic-book titan this time around, looses his hand in a freak accident, and then begins to suspect that his missing digits have a mind of their own. Stone hard-wires the hand’s activities firmly into Lansdale’s own personal issues; it seeks revenge on those he feels wrong him, whether male competition (the artist drafted to continue his popular strip) or his unfaithful wife. The film develops Lansdale’s failing psychosis as a result of his abrupt disability, and works that idea out rather than get bogged down in supernatural explanations.

Stone, of course, had been wrestling with his adaptation of Conan the Barbarian at the time, and it’s easy to see parallels with not only Lansdale but the fictional character described here as Mandro, a barbarian whose powers leave him alone and defiant. The strip itself, drawn by Barry Windor Smith, is ideal for the purpose of suggesting both the strength and the weakness of Lansdale’s imagination. While Dustin Hoffman and Christopher Walken were mooted for the role, Michael Caine brings some intensity to the tormented creative, and his descent into madness is convincing. 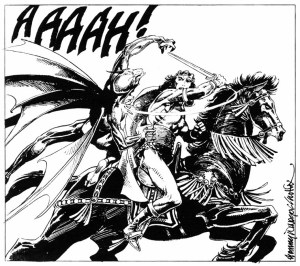 I came to scoff at The Hand, but it’s a far better film than I remembered, tightly reined into the task of exploding a male psyche on the edge of paranoid delusion. Stan Winstone and Carlo Rambaldi do a neat job in showing how the decaying hand goes about it’s deadly business, while Stone maintains an edge by never quite tipping the audience off as to how real the internal or external threats are. The Hand is violent, pulpy stuff, but it’s also one of Caine’s better roles, and offers Stone’s decidedly personal riff on the prototype body horror of The Beast With Five Fingers, The Hands of Orlac and other familiar severed hand tropes.