‘Let loose the Kraken!,’ proclaims Zeus (Sir Laurence Olivier) in an un-iconic moment from Desmond Davis’s blockbuster family entertainment from 1981, a high-gloss romp pushing an all-star cast through various Greek myths. The Kraken is quite a nasty-ass monster in anyone’s dog-eared school textbook, but there’s a number of other creatures to be dispatched first; with stop-motion pioneer Ray Harryhausen on effects, it’s the monsters which bring back nostalgic shivers here. And although your first thoughts might head to Bubo the mechanical owl, there isn’t a whole lot of Bubo going down here. 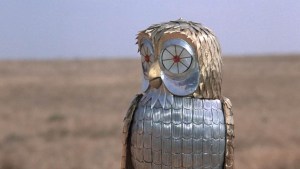 Instead, we see an old-school studio film with some modern trappings, a film charming in it’s quaint naivety. We start with a family favourite; a woman and her baby being sealed in a coffin, and finish on a lengthy speech about the dangers of mendacity; what child wouldn’t thrill to these elements? In between, we see the baby grow up to be Perseus (Harry Hamlin), get trained by Burgess Meredith as in Rocky, inherit a magic helmet, sword, shield and horse, and set out on a mission to defeat the fearsome Kraken. 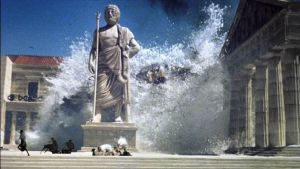 Clash of the Titans feels like it’s been made by a team who know what they are doing; the structure, unwieldy at first as the Gods argue and do their Monday morning quarterbacking while Zeus footers about with his collectibles, pays off in a series of back-to-back, rock-em’, sock-em’ bouts with the satyr-like Calibos, scorpions, Medusa and a top of the bill tussle with the Kraken. Harryhausen’s animation is as awesome as ever, giving these characters as much personality as the actors. But the process-shots are hideous by today’s standards, the all-star gods turn out to be rather dull, and kids at the time found the plot somewhat lumpy.

And yet, Clash of the Titans still stands up well, the last hurrah for an old-school kind of film-making that was effectively blown out of the water by Star Wars. The climaxes are dark and intense, the locations are spectacular, and at least one in every three effects shots is a winner. There’s a lovely anything-goes feeling on unpredictability, with talking statues, deadly tsunamis and the Stygian Witches, surely a great unused name for an indie-rock band. It might not quite have been the hit that the makers hoped for, but as a film worth re-enacting with cushions and paper hats on the couch in these pandemic times, there’s a lot of retro-fun to be had in this world of jittery monsters, stolid heroes and musical metal birds.